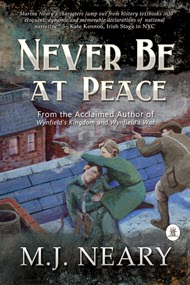 Never Be at Peace

A pugnacious orphan from a bleak Dublin suburb, Helena Molony dreams of liberating Ireland. Her fantasies take shape when Maud Gonne adopts her and sets her on a path to theatrical stardom - and political martyrdom. Swept up in the Gaelic Revival, Helena succumbs to the romantic advances of Bulmer Hobson, a Fenian leader with a talent for turning friends into enemies. After their affair ends in a bitter ideological rift, she turns to Sean Connolly, a married fellow-actor from the Abbey Theatre. As Ireland prepares to strike against the British rule on Easter Monday, Helena and her comrades find themselves caught in a whirlwind of deceit, violence, broken alliances and questionable sacrifices. In the words of Patrick Pearse, “Ireland unfree shall never be at peace”. For the survivors of the Rising, the battle will continue for decades after the last shot had been fired.

This week I'd like to welcome M.J. Neary (Marina Julia Neary), whose novel Never Be at Peace was recently published by Fireship Press.  Her book has been hailed as "a gripping and intense tale of Ireland in the thick of revolution" and "meticulously researched and boldly-written."  (See my own review here.)  In today's guest post, Neary talks about what goes into the making of a rebel - not the external and political causes of rebellion, but the psychology that underlies a rebel's predilections.

The remarkable drawings shown here are by Alissa Mendenhall,  illustrating some of the most dramatic moments in Never Be at Peace, and Neary is using them with the artist's permission.

A few words about the author:

A Chernobyl survivor adopted into the world of Anglo-Irish politics, Marina Julia Neary has dedicated her literary career to depicting military and social disasters, from the Charge of the Light Brigade to the Easter Rising in Dublin. Her mission is to tell untold stories, find hidden gems and illuminate the prematurely extinguished stars in history. She explores human suffering through the prism of dark humor, believing that tragedy and comedy go hand in hand.  Her debut novel Wynfield's Kingdom: a Tale of London Slums appeared on the cover of the First Edition Magazine in the UK and earned the praise of the Neo-Victorian Studies Journal. With the centennial of the Easter Rising approaching, she has written a series of novels exploring the hidden conflicts within the revolutionary ranks.  Never Be at Peace: a Novel of Irish Rebels is a companion piece to Martyrs & Traitors: a Tale of 1916.

"To free his country, he enslaved his family". That is a tag line for my novel "Brendan Malone: the Last Fenian", the first one in my Irish nationalism series. My ongoing mission is not merely to depict certain tragic events that took place in the early 20th century Ireland but also to provide insight into the psyche of a revolutionary, regardless of his or her nationality. With the 100th anniversary of the Easter Rising approaching, there is a surge of interest in the subject among historians, politicians, novelists and general lovers of Irish history.  I position my work as an antidote for those whose vision was blurred by the one-sided romanticism of "Braveheart" or "Michael Collins".  The image of a pan-Celtic hero against the evil English oppressor.

The most liberally dispensed advice is "Write what you know".  And I just happen to know rebel psychology.  I grew up with ethnic tension in my house.  It doesn't matter that the conflict I witnessed as a child was Russian-Polish instead of Anglo-Irish.  There are many parallels involving linguistic, territorial, religious and socioeconomic components.  My mother is Russian and unabashedly pro-imperialism.  It is her philosophy that big fish eats small fish, and large objects attract smaller objects.  In her mind, there is nothing wrong with one nation dominating its smaller neighbors.  In fact, she believes that some nations just cannot handle independence.  They actually benefit from being dominated. Her first husband and my biological father, on another hand, held a diametrically opposite view.  He was outraged by Russia's oppression of her smaller neighbors and actively championed de-russification of the Baltic states, Ukraine and Belarus in favor of restoring the native culture.  A prominent operatic coach who had produced several world-class singers, he was somewhat of a public figure, so his voice was definitely heard, at least on a local level. Both my parents are very intense and opinionated people, so you can imagine our dinner conversations.  Strange as it sounds, but those ideological conflicts, were not all that uncommon within families.  Yes, you can sleep in the same bed and still be on the opposite sides of the barricade.


Some individuals find the glamor of martyrdom more enticing than the very Idea they defend.  My birth father fell into that category.  He would experiment with his own psyche, work himself up into a fanatical frenzy, until his blood pressure would reach 180/130, his pupils would dilate and his ears would start ringing.  He had this peculiar talent for repressing his self-preservation instinct.

Years later, working as a research assistant at La Salle University, I learned that many of the key figures of the Easter Rising also came from mixed families.  Many of them had one English parent and were afflicted to some extent with an ethnic identity crisis.  I remember asking myself this question: "Whose side am I on? Am I Russian or Polish? If I agree with Mom, will Dad disown me?" Now that I am an American citizen, and my parents are no longer together, those questions seem irrelevant.  But when I was a child growing up in the former USSR during the late 1980s in a politically divided family I had a dilemma on my hands. This dilemma was by no means unique to me. There were other children in the same situation. So when I started reading the works of Patrick Pearse, who grew up with an aloof domineering English father and a submissive Irish mother, his experiences spoke to me.  Even though Pearse and I are separated chronologically and geographically, his sentiments resonated with mine. Patrick Pearse went on to embrace his Irish side, became an ardent Gaelic revivalist and ultimately gave his life for his cause.  Historians and psychologists have shared their theories regarding the cause behind that switch. The consensus seems to be that Pearse, being an awkward, shy, clumsy child, frequently ridiculed and excluded by his peers, was inclined to side with the outcasts.  I would not go as far as suggesting that Pearse's awkward adolescence was the only reason for his conversion to Irish nationalism, but it certainly did play a part.


Interestingly enough, the man who had sworn Patrick Pearse into the Irish Republican Brotherhood came from a totally different walk of life.  Born into a prosperous Quaker family, Bulmer Hobson was handsome, well-spoken, athletic and confident.  His father was an Ulsterman of predominantly English stock, and his mother was from Yorkshire.  In short, he did not have blood links to the Irish culture.  Nevertheless, he became one of the most notorious advocates for Irish independence in Ulster.  To him it was a question of morality and human rights.  He sided with the underdog, even though he came from privilege himself.  Eventually, Hobson and Pearse went their opposite ways.  It's interesting how they came from different walks of life, walked side by side for a brief period of time, and then went in the opposite directions.  Pearse loved the idea of an armed rebellion, even if it had no chance of success, and Hobson was disgusted by the idea of vain bloodshed.  "No man has the right to risk the lives of others to carve for himself a niche in history", Hobson stated in a public speech just a few days before the Easter Rising.  That bold phrase got him kidnapped by his own former comrades and held captive until the rising was well underway.  (See illustration)


In many circles it's still blasphemous to question the sainthood of certain "martyrs".  Incidentally, "Martyrs & Traitors" is the title of my second book in the series.  There is a combination of pathos and sarcasm in that title.  These two seemingly polarized concepts that represent black and white in reality jumble into one grey mass.

Shortly after announcing my novel "Brendan Malone: the Last Fenian" on Facebook, I started getting many friend requests from various Sinn Fein groups.  Before long, I started getting requests from individuals with masked IRA members as their profile pictures.  I won't get into the difference between the original IRA in the 1920s and what the organization has become. That subject deserves a separate blog entry. To make a long story short, I became awfully popular with the IRA online.  Apparently, none of my new friends had read my books, or if they had, clearly they hadn't picked up on the ambivalent tone in which I described the actions of the Irish republican leaders.  One time I asked a gentleman from Belfast why he endorsed that particular cause, and his reply was: "Because so much Irish blood was already shed in the previous generations."  No further questions.  Can't argue with a rebel's logic.

I'd like to thank Marina for sharing these insights with us, and to wish her well with her book launch.

To learn more about Marina and her books, see her Fireship Press page.

To purchase Never Be at Peace, Brendan Malone: The Last Fenian, or Martyrs and Traitors, click on the cover below:

Great post. I'm reading "Never Be at Peace Now" and one definitely sees the true human beings behind the rebellion.