The box liked it 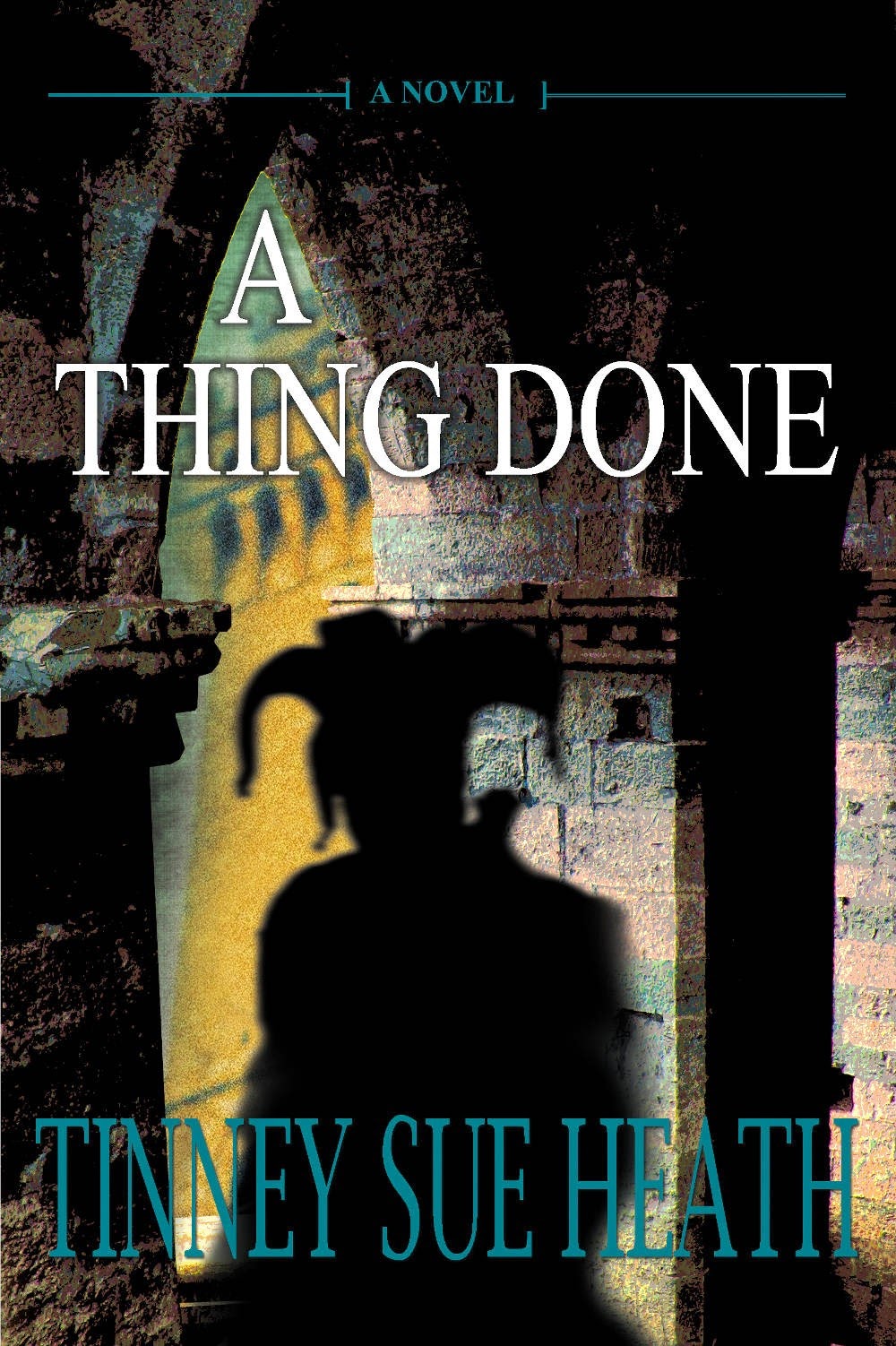 My historical novel A Thing Done, set in Florence in 1216, is now on sale.  For the next month, more or less, we've dropped the price drastically for ebook versions on Amazon, Barnes & Noble, and iTunes, and lowered the price on the paperback as well.  It's now going for $3.50 for Kindle, $2.50 for Nook, and $2.99 for iTunes ebook version.  (I have no idea why those prices are different.  I just work here.)

If you haven't read it yet, I recommend it.

"Of course she recommends it," I hear you saying.  "She wrote it."

Once, when my husband brought home a DVD, I asked him why he had chosen that particular film.  His answer?  "Well, the box liked it."

But this book I still like.  I'm not saying it's perfect, but I liked writing it, I liked having written it, and - most amazing of all - I even liked reading it.  And I think you might, too.

Medievalists.net liked it (read their review here):  "I've read a lot of historical novels over the last few years but I have to say that hands down, this one is at the top of my list," wrote Sandra Alvarez.  It makes me happy to know that people who are familiar with the underlying history enjoy my book.

The Sharp Writ Book Awards liked it.  It shared the top prize in the fiction category with another book, so now it gets to wear a little gold ribbon, and I have a plaque sitting on my bookcase: 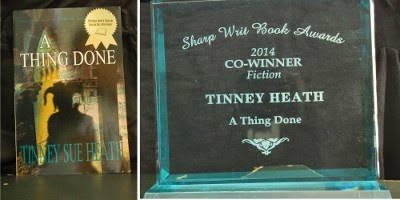 Lots of kind people have told me they enjoyed it, so I don't hesitate to recommend it now.  And doing so reminds me of some of the more memorable ups and downs in the saga of trying to sell copies of this book since it was published in October 2012.

Here's the blurb, as it appears on the book cover:

In 1216 the noble families of Florence hold great power, but they do not share it easily.  Tensions simmer just below the surface.  When a jester's prank-for-hire sets off a brawl, those tensions erupt violently, dividing Florence into hostile factions.  A marriage is brokered to make peace, but that fragile alliance crumbles under the pressure of a woman's interference, a scorned bride, and an outraged cry for revenge.

At the center of the conflict is Corrado, the Jester, whose prank began it and who is now pressed into unwilling service by both sides.  It will take all his wit and ingenuity to keep himself alive, to protect those dear to him, and to prevent the unbridled ambitions of the nobles from destroying the city in a brutal civil war.


Many different versions of this blurb exist, because one must try many different things to sell books.  There was the one where I tried it in question form:


Will Buondelmonte's reckless act set off a full-scale vendetta?  And if it does, will even the Jester's famous wit and ingenuity be enough to keep himself alive and protect those dear to him?


Sworn to secrecy, he [Corrado] watches in horror as the headstrong knight Buondelmonte violates every code of honor to possess the woman he wants, while another woman, rejected and enraged, schemes to destroy him.


I did want to stress the importance of the role of women in this book, since the Jester is male.  So I added this paragraph:


This is Corrado's story, but it is also the story of three fiercely determined women in a society that allows them little initiative:  Selvaggia, the spurned bride; Gualdrada, the noblewoman who both tempts Buondelmonte and goads him; and Ghisola, Corrado's great-hearted friend.  From behind the scenes they will do what they must to achieve their goals - to avenge, to prevail, to survive.


But these days you can't make your spiel longer.  You have to make it ever shorter and more succinct.  I learned that when I discovered Twitter.

You don't get a lot of room to work with on Twitter, and you have to save room for links and hashtags and so on.  If I want to call the book "prize-winning" it will cost me 13 characters.  If I write #buythisbookdammit, it will cost me 18.  And I absolutely refuse to write things like "U r gr8!"  I. Just. Won't.  It's all I can do to stop myself from leaving two spaces between sentences.  Left to my own devices, I'd probably tweet with footnotes.

When my son was very small, he was bouncing up and down in his crib when the bottom gave way, and he tumbled to the floor in a pile of mattress, blankets, and stuffed toys.  He was unhurt, but the whole thing was terribly exciting and he wanted to tell me about it.  Only problem was, he hadn't exactly figured out speaking in full sentences yet.  So he ran up to me and yelled, "Mommy!  Bed!  Down!  Uh-oh!  Wow!"

That kid would have been a natural, had Twitter existed back then.

No so his mom, however.  But I did manage a few I liked.  There was the Shakespeare pair:


"where civil blood makes civil hands unclean": Will could have been talking about A Thing Done.

"from ancient grudge break to new mutiny": The Bard could have said it about A Thing Done.

The book takes place over Easter in 1216, so I did some seasonal tweets on the appropriate days:


The history: Good Friday 1216, Florence - the calm before the storm.

The history: Holy Saturday 1216, Florence - a knight is running out of time.

I used the first line of the book:


It was a fool that began it, but it took a woman to turn it murderous. Florence, 798 years ago.


A tale of vendetta, betrayal, a spurned woman, civil war, and juggling.

What happens when a knight can't take a joke?

I'm still considering this one:


Price slashed (Also some of the characters, come to think of it.)

After a while, one gets a bit burned out with this sort of thing, and one might even start to get a little silly around the edges.  (Ya think?)  Then you find yourself thinking up marketing ploys like the pictures above, and these: 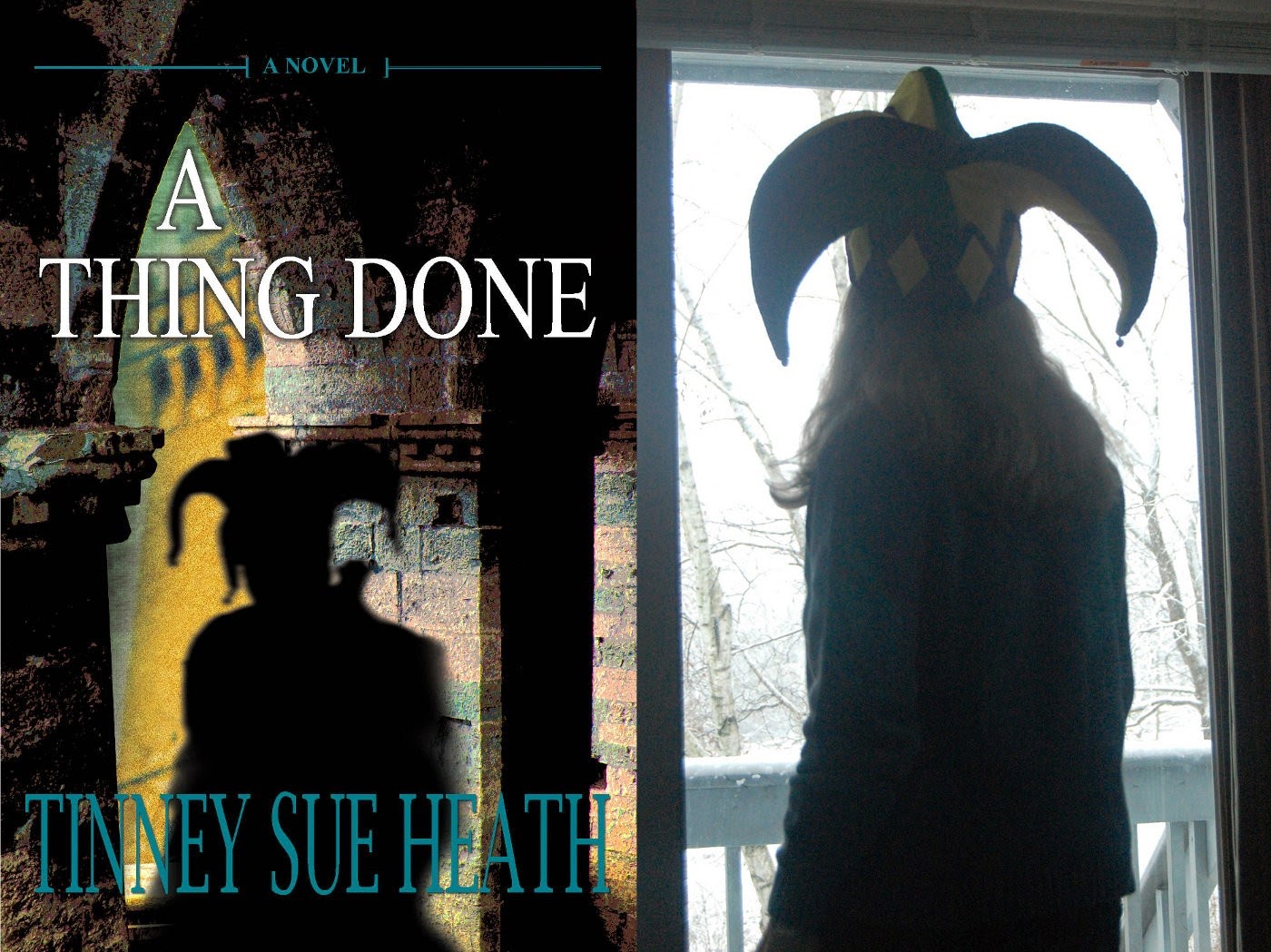 You dress up your musical instrument like your main character: 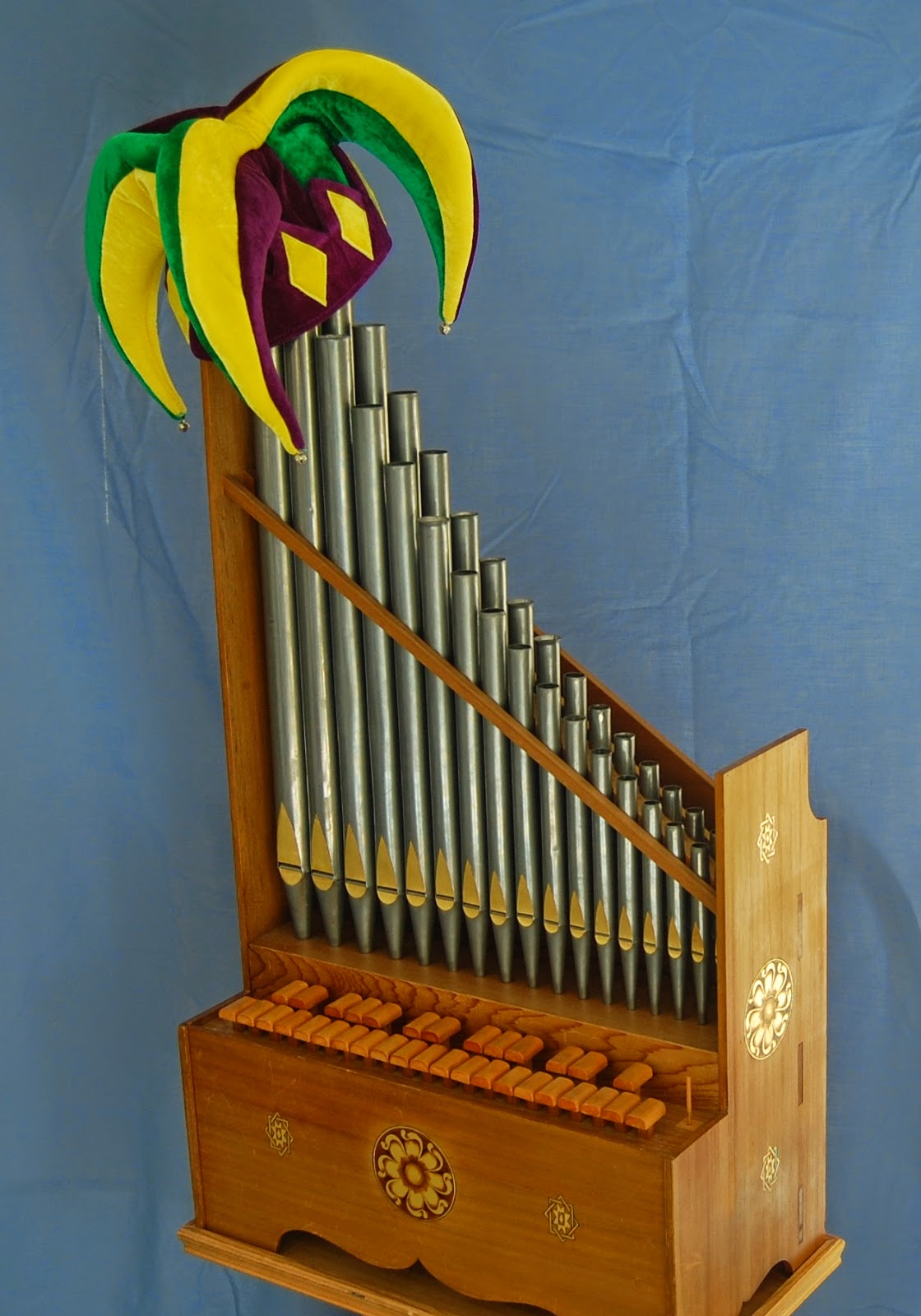 Then things really went downhill, and I came up with these: 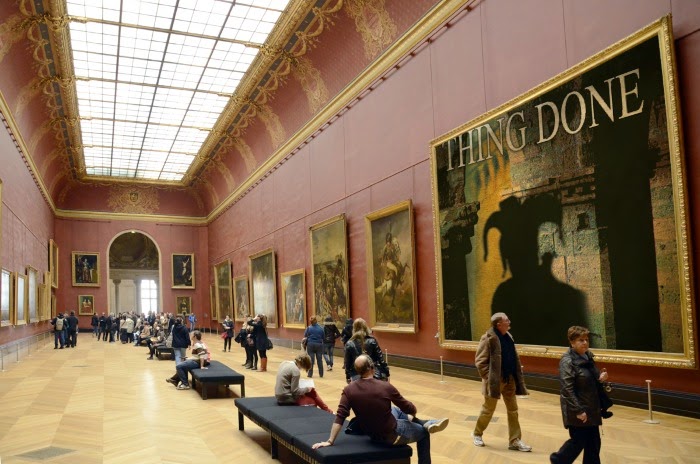 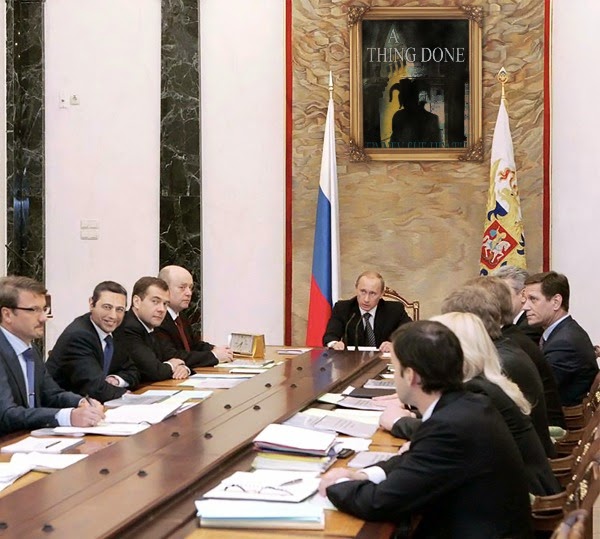 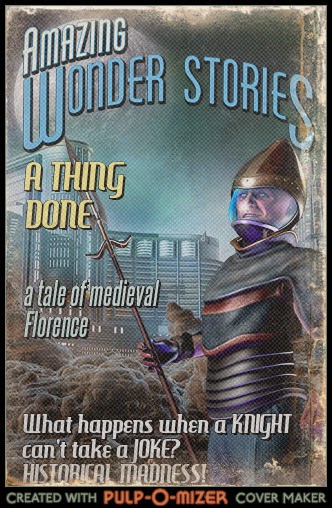 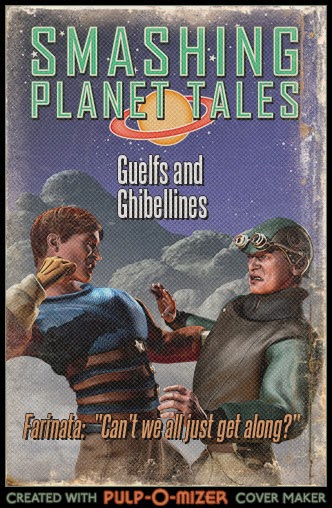 If you've stayed with me this long, you'll realize that no matter what you think of my book, I'm a better writer than I am a saleswoman.  I'd pretty much have to be.  You should also, despite all the silliness, have a pretty good idea by now what the book is about.  I hope I've piqued your interest, and that you'll acquire the book, read it, and enjoy it.

And if you'd like to read a bit more about it in a more serious vein before deciding, you could always take a look at my website, or at my author page on the website of my publisher, Fireship Press.


Images of the gallery and of Putin and his colleagues come from a fun site called PhotoFunia.  Pulp covers are from Pulp-o-Mizer.
Posted by Tinney Heath at 6:44 AM 8 comments:

When a one-star review is in verse... 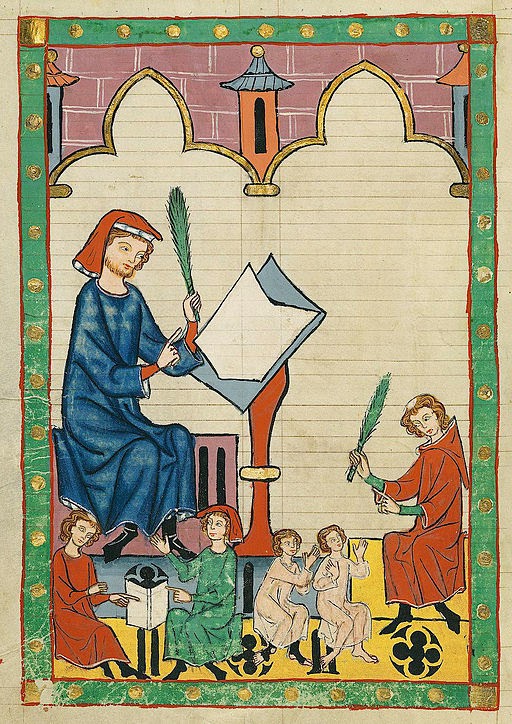 When a one-star review is in verse,
It somehow makes everything worse.
In their zeal to convince,
Critics make authors wince,
And whine, carp, bemoan, bitch, and curse.


The limericks have arrived!  My talented readers have sent in their contributions, as requested in my last post (find it here):  Give us your rude, your snarky, your obnoxious book reviews in limerick form.  They arrived in the Comments section, in email, by Facebook, and even by phone.  Some used the first line I provided ("There once was a one-star reviewer..."), while others started from scratch.

For your reading pleasure, here they are, with authors identified as they identified themselves to me.

There once was a one-star reviewer
Who cast titles into the sewer.
Authors cried foul!
With many a howl
But the one-stars came faster not fewer.     --Seri Good


I have the name of an edit-or,
that just might help this book sell more.
Till then it's a mess,
and I must confess,
I use it to hold open the door...     --Prue Batten


There once was a one-star reviewer
Who hungered each novel to skewer
And his only regret—
He could never beget
A rating of any stars fewer.     --Deb Atwood

This next one is not a limerick, but I felt that it nonetheless contained the very essence of limerick-ness, so it's included.

The writing was awful, the characters worse--
I wanted to send them all off in a hearse.
The plotline was boring, the action scenes tame,
And far worse than that, all the romance was lame.
The spelling was quirky, the grammar awry,
Punctuation changed wildly with no reason why.
Perhaps it gets better, when all's said and done,
But I couldn't force myself past chapter one.     --Julia West


There once was a one-star reviewer
Who loved to drag books through the sewer,
Whose great joy in life
Was to generate strife,
And proclaim there was no one as truer!     --Kathryn Louise Wood


Your book was a waste of my time.
Why make the poor hero a mime?
Write a strong female lead,
With a magical steed,
Add some teenage angst – now that's sublime!     --Linda Wendt

And just to round things off, I've included a couple more by my alter ego, Sven Leonardo MacGeneric:


There's way too much grammar-abusing,
And the plot is absurdly confusing.
If you've got to sell dreck,
At least employ Spellcheck -
And besides, it's not even amusing.


It desperately needs a good edit
(Or maybe we ought to just shred it).
The writing's outrageous,
There's too many pages,
And if there's a sequel, I dread it.

And that's it.  Many thanks to my talented contributors (especially for getting me off the hook for coming up with a new post this week), and here's hoping that none of us will be the recipients of any such scurrilous reviews anytime soon. 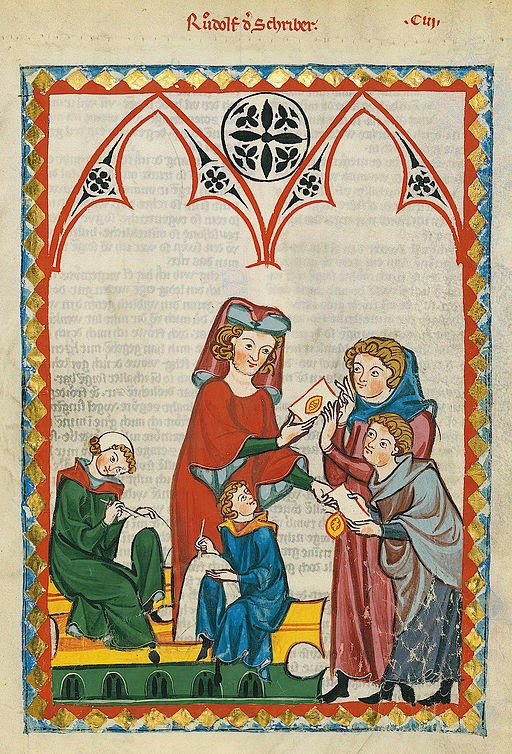 Images are in the public domain by virtue of being reallyreallyreally old.
Posted by Tinney Heath at 9:11 AM 2 comments: