Say what? (or, Navigating a Foreign Language on its Home Turf)

My husband and I have recently returned from several weeks in Italy, and I find myself thinking about the frustration, fascination, and sheer fun of trying to communicate in a language other than my native English.

My language status: I am not fluent in Italian, but I get by reasonably well. I read the language better than I speak it, because (1) I read it all the time when doing research for my writing, and (2) I am a hopelessly self-conscious speaker, and forgetting one word or being uncertain of a verb tense is enough to silence me, because I want it to be perfect.

Of course, Italian is not a monolithic language. It abounds with dialects, accents, regional peculiarities, and the kind of verbal shorthand that everyone tends to use in casual conversation, all of which add to the challenge of actually managing to communicate in it. Here's an idea of how diverse it can be: 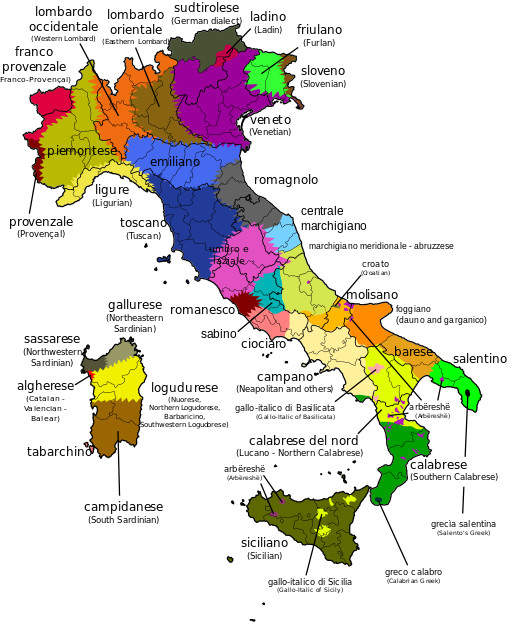 Depending on where you go in Italy, chances are that many people will speak to you in English. Yes, they'll know you speak English. With me, they take one look at my sensible shoes and my total lack of fashion sense, and the lightbulb goes on over their heads, and the thought balloon says "English! I can practice my English!"

Meanwhile, I am thinking, "This is my chance to speak Italian!" So off we go, with the Italian person speaking imperfect English to me and me speaking imperfect Italian to him. This results in some rollicking conversations, and it really is a lot of fun.

We tend to spend a lot of time in smaller towns, towns with less of a tourist presence than the major cities, and there I find it is genuinely useful to have some grasp of the language. The hostess at our agriturismo this trip, for example, didn't have any English, so communication depended on my skills, which for the most part were there when I needed them.

People in train stations tend to speak train English; people in restaurants speak restaurant English; people in museums speak museum English, and so on. This is fine for a while, but it's pretty easy to veer off course if the conversation goes anywhere even slightly unusual, and then we're all out of our depth.


I had one conversation with a shopkeeper on this trip that resulted in the two of us exclaiming "Brava!" to each other and sharing high fives, all because she remembered some obscure weirdness in English (I don't remember which, we have so many), and I managed to do something fairly sophisticated in Italian ("Woo-hoo! Correct use of the subjunctive AND a reflexive verb, all in one sentence!").

Once in a while I run into a fellow perfectionist. That would include the waiter who was trying to answer my questions about the menu. He was speaking English, and I was speaking some of each language, but I'll render it here in English:

Electronics seem to have a harder time than I do, for the most part. I had occasion to type a couple of emails in Italian while we were there, and I hadn't figured out how to disable Autocorrect on my iPad, so the results were odd, to say the least. My cheery "Buon giorno!" got corrected into "Buon ginormous," and my comment that we were running late ("in ritardo") came out as "in Ricardo." I mentioned that we had a rental car ("macchina"), but the iPad decided it was a "macchiato." And when I wanted to speak of "nostra partenza" (our departure), it absolutely insisted that I must mean "Nostradamus partenza."

I therefore wish all of you a very buon ginormous, hope that you don't find yourselves in poor old Ricardo, and suggest that if you are in need of a macchiato, you consider buying it instead of renting it. I have no idea what to do about Nostradamus. Lots of people didn't, as I recall.

And then there was our GPS. When we were in Greece a couple of years ago, we named our GPS lady with the British accent Cassandra, on the grounds that nobody ever listened to her, either. This time I wanted to call her La Compiuta Donzella, after a 13th century Tuscan poet, but my husband kept referring to her as the Madonna della Locazione Globale, and that stuck. Her main problem was pronunciation.

My husband, by the way, has picked up a smattering of Italian along the way, but once in a while he still comes up with a howler. My favorite was the train ride when we were trying to figure out what stop we were passing, and he saw the sign that said "Vietato attraversare i binari."

I almost hated to point out that "Vietato attraversare i binari" means "It is forbidden to cross the tracks," but I couldn't resist observing that a town named "Forbidden" didn't sound like a really great place for our vacation.

Then there are pronunciation issues. The Italians don't do too well with the letter H, a voiced glottal fricative. So, when we're checking in somewhere and I need to give them our name (Heath), I spell it out: "Acca come hotel, E come Empoli, A come Ancona, T come Torino, e un'altra Acca," and they make a heroic effort to say the name, and it comes out as "Signora Heat." This is because even worse than the H, which they work at, is the digraph TH, the voiced or unvoiced dental fricative. That just isn't an option.

Favorite example: in Pienza, a few years ago, a pleasant young woman was showing us through the Palazzo Piccolomini.


We managed to be thoughtful and studious and nod appropriately as she told us the history of various Piccolomini popes and their predecessors, and we were fine with Pius the First, and with Pius the Second. But every time she got around to "Pius the Turd," we had to be sure not to look at each other, lest we lose it, which would have been rude.

I'll close with the charming, if slightly askew, comment by the church sacristan who was showing us around the sanctuary of a church that has a connection to my work in progress. He was quite indifferent to us at first, but he warmed to us when I for once remembered to murmur "Permesso," before walking through the door he had just opened for us. While it may seem strange to Americans to request permission to enter a space you have already been invited into, it is in fact a rather subtle custom, a way of saying, "I acknowledge that this is your space and not mine." An Italian would have done it without thinking. I've had to train myself. But he immediately dropped his guard, and we began one of those dual language conversations that when you try to remember them, you can't recall what was said in which language.

I mentioned my main character - a historical person, but not one many people have heard of - and his eyes widened, and he proceeded to rattle off her history in rapid Italian. He didn't tell me anything I didn't already know, but what he said was accurate, and at that moment there was a real sense of connection between us. So when we parted, he shook my hand and smiled at me and, in English, wished me "Merry Christmas!" It was the week before Easter, so he had missed by a bit, but that was fine. We settled on "Buona Pasqua," and parted as friends.