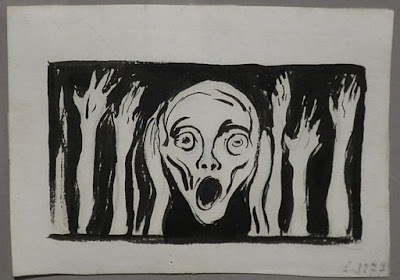 It's been very Yeatsian out there lately. A glance at any newspaper, or my Facebook feed, is enough to give rise to despair, or at the very least acute anxiety. I've already bailed from Twitter and I can't believe Facebook is very far behind. It's a mess out there, folks, and I wish I were less sensitive to it.

Yeats, in his post-WWI poem The Second Coming, articulated it:


Turning and turning in the widening gyre
The falcon cannot hear the falconer;
Things fall apart; the centre cannot hold...

And I must admit I relate to another observation in the same work:


The best lack all conviction, while the worst
Are full of passionate intensity.

It's hard not to wonder with Yeats "what rough beast, its hour come round at last, slouches towards Bethlehem to be born."

So, like many others, I've been dealing with a continual low-level angst of late, and recently it's been exacerbated by stage fright as I contemplated the upcoming debut concert by our new trio, specializing in medieval instrumental music.

I've always been prey to stage fright. It can be crippling, and it's certainly one of the main reasons I didn't pursue a career in music. My hands get shaky, I can't get warm, my breathing is shallow, and I am prone to doing extremely dumb things at the worst possible times.


The other two members of the trio, my husband Tim and our friend Stacy, are luckier. They were relaxed and calm and thoroughly capable.

We did make it through, in spite of me, and nothing particularly disastrous occurred. It was even kinda fun, as it turned out. But somehow, in the weeks before the performance, the two threads (anxiety about the state of the world, and performance nerves) came together, and the result was this poem:

Because I played badly, the world exploded.
Because I missed my cue, refugees chose the wrong moment to cross the border.
Because I faltered, villagers did not escape their burning huts.

This morning there was no review.

Because there was no review, prisoners spent another day without charges, without rights, without hope.

Because I lost my place, scores of families trudged toward makeshift camps.
Because my fingers trembled, victims shook with fear.
Because I was timid, gangs roamed the streets terrorizing the helpless.
Because I played without conviction, politicians lost all their convictions.

Because a man coughed, thousands died of a preventable disease.
Because a woman rushed out in search of a bathroom, a tsunami destroyed the coast.

Because the program had a typo, a scandal broke in the media and lives were ruined.
Because at one point the microphone shrieked feedback, somewhere a woman screamed.

There was a bloodthirsty ovation at the end, with cries of "Encore!"

Posted by Tinney Heath at 6:49 AM No comments: