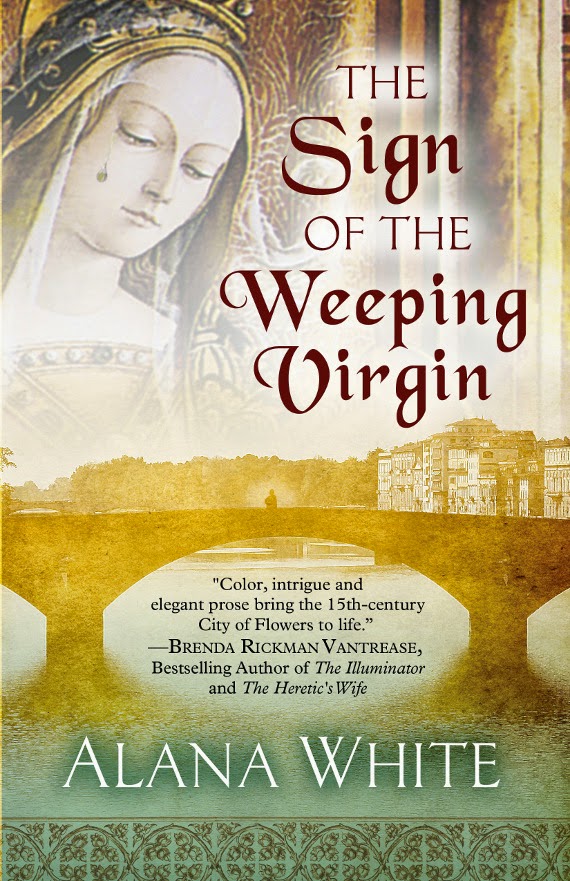 Today I'd like to welcome Alana White, author of the historical mystery The Sign of the Weeping Virgin, who is here today to participate in the "Meet My Main Character" blog hop.  (To see my contribution to the hop, scroll down to the previous post.)

The Sign of the Weeping Virgin has won praise for Alana's "elegant prose and skillfully integrated research," her "sure-handed storytelling," and her "richly evocative descriptions of Renaissance-era Florence."

Alana and I share a love for all things Florentine, though we write about different time periods.  I am delighted to welcome her to this blog to tell us something about her main character.


What is the name of your character?  Is he/she fictional or a historical person?

Guid'Antonio Vespucci.  He is an actual person, a prominent lawyer as well as a public and private investigator.  And he is Amerigo Vespucci's uncle.

When and where is the story set?

It is in Florence, Italy at the height of the Italian Renaissance, when Lorenzo de' Medici was the unofficial "Prince of the City."  Much of the action occurs on Borg'Ognissanti (All Saints Street) in Florence, where Guid'Antonio's palazzo sat right around the corner from the workshop of his neighbor, Sandro Botticelli.

What should we know about him/her?

He is Lorenzo's close personal friend and political ally—even to the point of backing Lorenzo against Pope Sixtus IV, who plotted to have Lorenzo assassinated during Easter Sunday Mass in Florence Cathedral on 26 April 1478.  It is this historical incident (called "The Pazzi Conspiracy") that is the centerpiece for my story.  Lorenzo did not die, but his brother did.  When the Florentine government learned of the Pope's part in the assassination plot, it declared war on Rome in Lorenzo's name.

What is the main conflict?  What messes up his/her life?

After the war—during which Guid'Antonio and Amerigo served as ambassadors at the French court—Guid'Antonio returns home to Florence believing the terrible conflict is over and that now he will be able to devote himself to his wife and family, whom he has not seen in two years.  Instead, he learns a  painting of the Virgin Mary has begun weeping in the Vespucci family church.  People are interpreting the tears as a sign of God's displeasure with Florence for fighting with the Church.  And they believe God means to punish them in some terrible way.

What is the personal goal of the character?

To investigate the painting's tears and set the town at ease while making peace with his wife, who accuses him of caring more about his political career than he does her.

What is the title of the book?

The title is The Sign of the Weeping Virgin (Five Star).  It is available in print or Kindle editions.

Thank you, Alana, for this fascinating introduction to Guid'Antonio.  Readers interested in learning more about Alana and her work (which includes two earlier books as well as this one) can go to her website, and anyone wishing to buy The Sign of the Weeping Virgin can find it on Amazon.

Her book has been translated into Portuguese, and while that may not be of immediate use to people reading this blog, the cover is so lovely that I couldn't resist including it here: 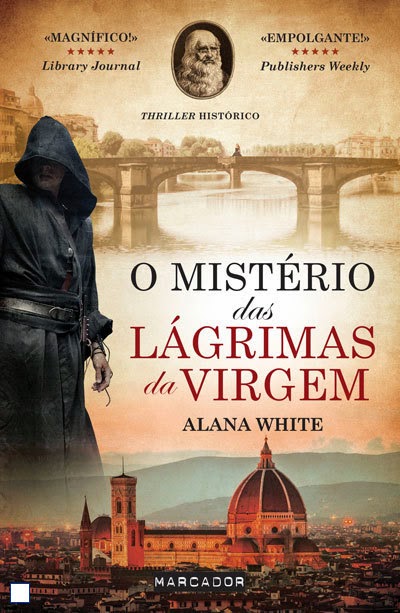 Email ThisBlogThis!Share to TwitterShare to FacebookShare to Pinterest
Labels: Alana White, Florence, Guid'Antonio Vespucci, The Sign of the Weeping Virgin