May 1812. Of Honest Fame. I'm more excited about these books by M.M. Bennetts than I have been about anything else I've read in a very, very long time. It was pure luck that I encountered them - well, luck and the lively and voluble historical fiction community - because the Napoleonic Wars were never exactly on my radar screen. Not even a little bit.

But I know excellence when I see it, and I see it here, both in the writing and in the author's meticulous research. M.M. Bennetts now has my attention, and I'm happy to report that more books are in progress. And while we wait for them, we can enjoy the author's erudite and entertaining website (where you can also order the books, which I would heartily recommend you do).

Also for your enjoyment, we have this guest post graciously provided by the author of May 1812 and Of Honest Fame. But first, by way of introduction, here's the "About Me" section from M.M. Bennetts's website:

"History, poetry, music and horses probably sums it up.

For some twenty years, I was a book critic for the Pulitzer Prize-winning newspaper, The Christian Science Monitor, specialising in history and fiction.

In researching the period of the novels, I have attended scholarly conferences marking the bicentennial of Trafalgar; studied the architecture, furnishings and art of the period; and read upwards of an hundred relevant histories and biographies, as well as the eyewitness accounts of Prime Minister Perceval's assassination found in the newspapers and magazines of May and June 1812.

An avid cross country rider, I'm also - so they tell me - an accomplished pianist and accompanist, having regularly performed music of the period of my novels."

Before we go any further into this business of research, you have
to understand just how much I hated Paris.

Not just hated. Loathed. I mean, this was the one place on
earth you could not get me to visit--right up there with the
Bermuda Triangle and steamy-air-thick-with-mosquitos,
crocodile-infested swamps. Just so we're clear.

It's true that my view of the place may have been coloured by the
fact that the single time I had been there, it had rained
torrentially for a fortnight, until even my boots were squelching
with water. And as it was high summer and the heat turned off in
the hotel, one could neither get warm nor dry one's clothes and
certainly not one's boots. I developed a stinking cold.

It may also not have helped that I had been in the company of one
who imagined that if he sat outside in cafes, all day, drinking
quantities of cafe au lait and watching the city go by, he would
turn into Hemingway. (A word to the wise--this method of writing
does not turn one into Hemingway. Oh, and I don't drink
coffee.)

So, you will imagine my reaction when my niece phoned from the
other side of the Atlantic to propose that she and her daughters
and we and our daughters should meet for a long weekend in Paris
in October. Yes, you're right. In a word, hostile.

But there's one thing I hated even more than Paris and that's
nagging. And my niece has held, for at least the past two
decades, the Gold Medal in World Championship Nagging. Hence
several nagging phone conversations later, I had begrudgingly
agreed--if only to shut her up--that we would indeed take the
Eurostar across the Channel and meet them in Paris.

(Stupidly, it never occurred to me that the reason my presence
was required was that I have fluent French and my niece has it
not. At all.)

So, grumpily to Paris.

The first indication I had that I had not been signed up in
absentia for the week from Purgatory was outside Les Invalides
where I had gone to refrain from spitting on Napoleon's tomb and
to kneel at the shrine to the Unknown Soldier there.

Because out front there were posters proclaiming a city-wide set
of exhibitions celebrating the bicentennial of Napoleon's
coronation as Emperor on 2 December 1804. Yes, yes, of course
the fact that they were celebrating the Bijou Corsican's
self-aggrandisement elicited a resounding harumph, but what of
that?

So, inside to pay one's disrespects, to jeer at the hyperbole of
the shrine belowstairs and eventually on to view the exhibition.

Now, it's true, at that point I may have been, as an historian,
less than charmed by Monsieur Buonaparte's Mafioso manners. But
nothing could have prepared me for the reality of his chavvy
obsession with bling. Remember, this is the era when Englishmen
are learning to dress as subtly and elegantly as possible in
navy, tan and black...And even the first step inside the
exhibition area and a quick glance about caused the jaw to drop.
And dropped and gawping it remained. 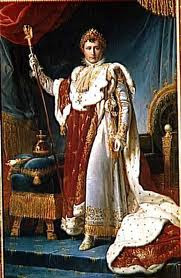 The items on display in Les Invalides had mostly to do with the
procession aspect of the coronation. So there was a model of the
specially built Coronation carriage. This little jewel bore so
much gold leaf, it made Her Majesty's carriages look positively
prosaic.

There were also several of the engraved and coloured plates of
the various liveries Napoleon has designed himself for his, er,
attendants to wear. One sees them as a bit of a blur in the
famous Coronation painting by Jacques-Louis David.

But individually, each of these little 'ensembles' took the
breath away--it was Tudor bonnets meets the Sun King's breeches.
The making of these hundreds of costumes must have kept France's
seamstresses busy for a year. And as for me,blinking stupidly was
quite possibly the only adequate response.Certainly, it was the only
response I could manage.

But even these many displays didn't prepare me for what
was across the room.

Now an ordinary stirrup is essentially a thick bar of metal upon
which one rests the ball of one's foot in order to give balance
and a platform in the rising trot. They're not, for experienced
horsemen, strictly necessary, though they do provide a certain
function, as I say, in rising trot. In walk or canter, they're
not really needed; they're just there.

However, for Napoleon's Coronation stirrups, forget all that.
These were solid gold. The shape was not that of a modern
stirrup either. No, these were formed from circles of precious
metal, etched and decorated with filagree. The decoration meant
that they were entirely useless and anyway, gold is a soft
metal...

But as I stood staring (mouth agape) at these splendid artefacts,
my whole perception of Napoleon was forced to shift. I mean,
these stirrups--they have a practical use--but they are where one
rests the soles of one's boots, which are coated in that which
the horses have previously emitted. So, solid gold filagree?
For that? Beggar a nation for that? What goes on in the mind
that demands such a thing?

My mouth still ajar, eventually I gave off staring and went to
lunch... 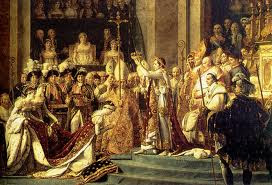 The next day brought the visit to the Louvre, where now, in the
great hall generally reserved for the vast murals of historic
significance, the famous mural of the Coronation by Jacques-Louis
David was in pride of place. And at the centre of the room, in
glass cases, the long tunic and embroidered booties that Napoleon
had worn beneath his coronation robe. Beside it, Josephine's
coronation gown.

There can be no doubt that the coronation robes together are
amongst the most beautiful garments one could ever hope to see.
Napoleon's robe of white silk, with its gold embroidery, was
indescribable, really. The workmanship was sublime. The stitches
in the fancywork bees (his own personally designed emblem) were
minute and perfect. And the sheer amount of gold thread used in
the embroidery! Holy wow. 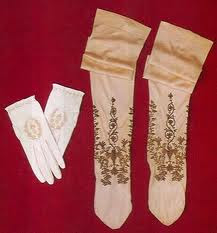 But after the obligatory five minute gawp, something else struck
me. Hard. I looked at the painting, measuring where the hem of
his robe ended on his ankle. Then looked back at the robe,
measuring it against myself--shoulder to ankle. And probably a
look of stupid astonishment obliterated all former emotion. For
Napoleon wasn't just just short. He wasn't just little.
Napoleon was diddy. We're talking 5'2".

And something else. Despite the many French accounts that
maintain that he didn't begin to 'thicken' until after 1811, he
was fat. He was a little tub. That gown would fit me
perfectly--that's me plus two or three very full down pillows
placed about my middle.

I duly gaped at Josephine's gown, of course. And thought too of
what an unhappy life I believe she must have had, married to such
a one, ramrodded into this coronation charade. And I admired the
further images of coronation costumes which were on display
too--particularly that of Monsieur de Talleyrand, the Foreign
Minister...

Still, the effect of it all must have been near blinding,
stunning even.

But that of course was the point. It was all a poor child's
fantastic dream of what would happen when he became king.

("When I grow up I'm going to be Emperor of France and walk on
streets of gold and you'll be sorry..." "Yuh, right!" Smack.)

Was Napoleon compensating for something? How long have you got?

Was he setting himself up in competition with that great French
warrior king, Louis XIV, le Roi Soleil? The golden beauty of the
Sun King and his glittering court of Versailles would have been
ditchwater dull by comparison.

Napoleon meant to outshine them all. He meant to expunge the
stain of his lowly Corsican birth and impoverished
childhood--even though he did act like a supreme Mafia don in
handing over the thrones of Europe to his feckless siblings. He
meant to stagger Europe's rulers and peoples with the show which
he believed would demonstrate his innate royalty, his greatness,
his immortality, his glory, his divinity even--the crowned heads
of Europe saw it as proof of his vulgarity.

And he was only 5'2". (Though one imagines the boys who'd teased
him in the schoolyard weren't laughing any longer...)

Yet within less than ten years, it would all be for nothing. By
early April 1814, France had been invaded by the armies of three
countries--all of whom had proper 'hereditary'
rulers--and Napoleon would be forced to abdicate, his dreams of
empire nothing now but dust...

And for me, having come face to face with the Emperor's personal
effects, designed by him to project the image of himself he
desired, having seen more clearly than I'd believed possible that
he was a man, a genuine person, (a short fat one) my view of the
whole period changed too...it wasn't just names and dates,
battles and casualty lists...it had become people.
--
M.M. Bennetts
http://www.mmbennetts.com/
Posted by Tinney Heath at 10:25 AM

What a joy to read M.M.Bennetts! I am gobsmacked about the Napoleonic bling. Thanks for this terrific guest post.

Terrific post.I am in awe!
Thanks for sharing!
AprilR