Another Perspective on Research (Guest post by Julia West)

It's a pleasure to introduce my friend and guest blogger, the prizewinning fantasy and science fiction author Julia West. Besides enjoying Julia's richly imagined stories, I've been impressed with the way she weaves research - anthropological, historical, scientific - into her work. I've asked her to write a post for us, so we can take a look at how another kind of writer approaches research, and she has generously provided this thoughtful piece, with many useful suggestions and links. Here's Julia: 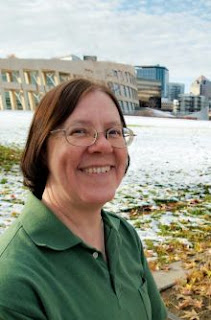 Another Perspective on Research

Thank you to Tinney for letting me do this guest blog. I'm Julia West, and I may be a bit different from others reading this blog. I'm not an historical writer; I write science fiction and fantasy. But I do a great amount of research anyway--both historical and anthropological (I have a degree in anthropology). Since my science fiction is mostly 'soft' (or character-driven), rather than 'hard' (or technology-heavy) science fiction, I don't do nearly as much scientific research (although, of course, I must do some).

In the over twenty years I've been writing (and selling) stories, the face of research has changed a great deal. When I started out, the only way to get the material I needed was to buy books or look things up in a library. I did both. My home library, built up over the last thirty years with books my husband and I have purchased, has over 5,000 volumes--some fiction, but largely nonfiction. We have an eclectic collection ranging from anthropology and archaeology through astronomy, botany, computers, electronics, folklore, history, languages (especially Japanese), and zoology (and pretty much everything in between).

In the past, I would look for material in a local public library first. The best place for beginning research, I discovered, was in children's books. I'll give an example. I'm basing one of the cultures in a science fiction series on the Hopi culture of southwestern North America. In the local library I found a children's book on the Hopi that gave me a quick overview of the culture, with photographs taken in the late 1800s and many line drawings. I also found a delightful book on pueblos, with many clear pictures and descriptions--very useful when describing the places my characters lived. With this basic background, I had enough information to begin my novel.

As I wrote, I'd discover areas where more research was needed. I'd save those up until I had enough questions to warrant a trip to the university library. There, I would dig through the stacks and anthropological journals. I'd make copious photocopies, which I'd put into binders and highlight, often adding sticky note flags to pages that were especially helpful. If the book I needed wasn't available, it was off to inter-library loans, and a wait of some weeks to get the information I hoped to use in my writing.

In the past few years, however, this has all changed. While I often use the local library to find a children's book for my initial research (the simple picture-filled format gives such a good basic overview), my usual first source of information is the internet. Although I don't trust Wikipedia completely (a source that anyone can edit is bound to be rife with personal opinion and cherished theories rather than fact), it's still a good place to start. A quick skim of a Wikipedia article on the subject of interest can give a basic idea on background. If the article is any good at all, it should have a bibliography. The bibliography can be invaluable for further research. Often it will lead to more in-depth internet sources. Often print sources are listed, and sometimes even a link to a book in an on-line bookseller's stock. If all I need is a quick fact--say, how widespread telegraph usage was in Great Britain in the 1850s--checking a couple of web pages against each other can be a quick, easy way to find it.

When I was doing research for my story "Soul Walls" (published in Sword and Sorceress XXIV) I needed a good reference for natural pigments. I already knew a fair amount about plant pigments from

earlier medieval research, but needed to know more about earth pigments. After perusing a Wikipedia article, I found the site Pigments Through the Ages (http://www.webexhibits.org/pigments/intro/index.html) in the bibliography, and was satisfied to find the section on red ochre (http://www.webexhibits.org/pigments/indiv/overview/redochre.html), which was exactly what I needed for my story.

Increasingly, nowadays, treasure troves can be found on the internet. When I was researching the telegraph question mentioned above, I found Distant Writing, a History of the Telegraph Companies in Britain between 1838 and 1868 (http://distantwriting.co.uk/index.htm), which gave me all sorts of facts I could use for verisimilitude in my writing. A few pages later in my novel (which is a fantasy novel with a culture based on Victorian England of the 1850s), I wanted a bit of information on railroad schedules. Several websites mentioned Bradshaw's Continental Railway Guides, which had (from 1839 on) combined the schedules of scores of local railways into a cohesive whole. I was delighted to discover that a scan of Bradshaw's Handbook for Tourists in Great Britain & Ireland (in four parts, 1866) was available from HathiTrust (http://www.hathitrust.org/) absolutely free, as it is now in the public domain. Although this scan is for a copy of the guide some years later than I need, it is such fun to read that I almost decided to change the (already nebulous) date of my novel to take in the information found therein. The guide first gives lengthy passages describing London, and then describes town by town along rail lines, with such information as to whether a location has a telegraph office and/or hotel(s), churches, market days, races, stately homes, and often a bit of history. What a great distraction from my writing these books became!

Two other large repositories of absolutely free public domain books have helped my Victorian research immeasurably. The first is Project Gutenberg, (http://www.gutenberg.org/). Often during my search for information, I've found a book published in the Victorian period is available there as an ebook. The proofreading is usually fairly good, considering it's all done by volunteers (although I've caught many a typo), and for quick research or extended reading, it's nice to have the book available when I'm away from the computer. The other is Internet Archive (http://www.archive.org/). What I especially like about Internet Archive's volumes is that I can usually download a scan of the original book, as well as an epub. Since their epubs don't seem to be all that well proofread (are they, perhaps, just raw OCR?), it's nice to have availability of the scan. Also, illustrations (and sometimes advertising) are there in the scans. I was ecstatic to find A Concise Dictionary of Old Icelandic available at Internet Archive (http://www.archive.org/details/concisedictionar001857). I had a partial photocopy of this volume, which I had made sometime back in the early 1990s at a university library, and having the entire dictionary available made the research for one of my fantasy series much easier.

Many libraries and document repositories are making scans of their material available. During my Victorian research I was thrilled to find London Labour and the London Poor, Vol. 1 by Henry Mayhew available from the University of Virginia Library (http://etext.virginia.edu/toc/modeng/public/MayLond.html). Although there are some proofreading problems in the online version of this book, this volume is invaluable in my research on the street culture in London for my novel.

Scans of actual early manuscripts are available online as well. Why settle for secondary or tertiary sources when you can--without traveling any farther than your computer desk--read a primary source document? Travel is more fun, but a download is more economical. A site like Penn in Hand (http://dla.library.upenn.edu/dla/medren/index.html), Penn Libraries' place for scans of manuscripts, could make your research much easier. Thus far I have used it merely to research handwriting in some of the medieval manuscripts, but there's a lot of interesting content here already, and it appears to be growing.

The internet is making it much easier for me to answer quick research questions without resorting to an hour drive to a university library (and the danger of becoming totally lost in research for the rest of the day--which it's easy for me to do). Although one is more likely to get misinformation through the internet, if you use the same good protocol you would for any kind of research, it's now possible to get answers far more quickly than ever before.

Julia H. West's website is at http://juliahwest.com/, and all her previously published stories are available as ebooks through Callihoo Publishing, http://callihoo.com/.

A couple of Julia's stories, with covers by her daughter Danica West