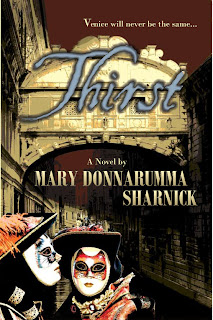 This week I'm delighted to bring you a guest blog post from Mary Donnarumma Sharnick, author of the remarkable novel Thirst, a historical thriller set in Venice.  Not only has Thirst been getting great reviews, it's being made into an opera!  Mary's blog has more information.

Greetings of the Season and Best Wishes for a Happy and Productive New Year!
My thanks to Tinney S. Heath for her generous invitation to join an ever-expanding group of guest bloggers. I’m Mary Donnarumma Sharnick, Tinney’s fellow Fireship Press author, a writer of historical fiction presently focused on Renaissance Venice, its islands in and beyond the lagoon, and its maritime empire. My first novel, THIRST, published in March, 2012, is set in 1613 Venice proper. You can learn all about it at www.marydonnarummasharnick.com and www.fireshippress.com .
At the moment, I’m drafting the first novel of a proposed trilogy based on the historical Michael of Rhodes. This fascinating man wrote a maritime manuscript accessible to readers in a facsimile edition (THE BOOK OF MICHAEL OF RHODES: A FIFTEENTH-CENTURY MARITIME MANUSCRIPT, VOLS. I-III. The MIT Press. Editors Pamela O. Long, David McGee, and Alan M. Stahl. 2009) The manuscript, begun in 1434, provides copious and detailed accounts of mathematics, ships and shipbuilding, navigation, time reckoning, journey maps, a glossary of maritime terms, prayers, drawings, astrological charts, copies of wills, and more. The editors of the Michael of Rhodes Project have penned a number of essays that together craft a coherent context of Michael’s life and times.
Last April, journalist Tracey O’Shaughnessy asked me why I write fiction rather than history, given my insatiable curiosity about the past, its diarists, and its scholars. While I could not and cannot provide Ms. O’Shaughnessy with a pithy answer, I can explain how the historical record jump starts my novelist’s mind.
If historians verify the Who? What? Where? and When? of past human events in specific worlds while suggesting the Why (s)? of them, writers of historical novels instead create contextually accurate fictions that invite readers to experience vicariously how it feels to be alive in such worlds.
The Michael of Rhodes Project lets me know that in 1401, when he was sixteen years of age, Michael left his family and island and traveled to Manfredonia where he joined the Venetian fleet as an oarsman. It lets me know that, over a decades-long career, he advanced to the highest position allowed a foreigner. It shows me his faith (prayers and drawings) and intelligence (he mastered the Venetian dialect, mathematics, and a plethora of other learning). It tells me his wife Cataruccia pre-deceased him. It teaches me about galley construction and naval discipline.
What it cannot do is let me know how Michael felt to be alive. What motivated him to leave hearth and home? What did it cost him, a foreigner (Only because the plague, popularly called “the Death,” wiped out perhaps eighty percent of the Venetian population, were outsiders allowed to man the great republic’s oars.), to achieve among higher-born Venetians? Did his dream of belonging to la Dominante, the dominant one, ever turn to nightmare? What personal challenges did he encounter at sea and on land? Whom did he trust? Who failed him?
Fiction allows me to explore such questions. Fiction lets me enter the physical, emotional, intellectual, ethical, and spiritual realms that comprise a human belng. Though students and critics of the novel refer to such human beings as characters and protagonists, readers must, if they are to be satisfied, believe any character, any protagonist, is a virtual human being, an earthly creature not so different from ourselves.
So my Michael is an imagined one. Certainly he is anchored (no pun intended) in the verifiable historical record. But he derives from that record rather than imitates it.
From the historical Michael himself I have learned how the first galley on which he rowed would have looked and functioned. What I have imagined is how Michael was initially drawn to it. Below find my novelist’s rendition:
“He had just turned five, old enough to keep up with his father’s pace to the short dock in the cove his mother could see from the doorway, old enough to accompany Theodore to the pre-dawn dropping of the nets. Sitting in the rowboat within sight of the big harbor and chewing on a crusty piece of the previous night’s bread his mother had handed him after crossing her arms against her chest to say good-bye, he watched the ripples in the water against the coming dawn. Then, just as the sun rose, he heard what had sounded like a chorus singing. He turned to look. That was when he knew.
It was not so much the looming galley itself, but more the synchrony of the rowers that mesmerized him. Their cohesive movements, matched with their booming voices that became one voice, urged him to abandon home, even though he could not yet reach the door latch to let himself out or in. Even then, he yearned to join this crew of men. With them he would be able to become a part of something bigger than himself, than his parents, than the island of Rhodes. The seas and the lands that sprang from those seas belonged to the rowers, he believed. They would become his, as well, he decided then and there. He had dropped the bread crust, forgetting sustenance for a moment, hungering instead for adventure.”
For me, Michael of Rhodes has already transformed from a static historical figure into a kinetic, flesh-and-blood person. My novelist’s goal is to develop him fully and vividly so that future readers feel as if they are in his good company when they read (working title) PLAGUED.
Now, back to work!
***

Tinney Heath says:  Thank you so much, Mary.  That was great - I, too, love that moment when a historical figure becomes real for me.   I saw a presentation at the medievalist conference at Kalamazoo once on Michael of Rhodes; I'm eager to read your book about him.


Here's a little bit about Mary:

Mary Donnarumma Sharnick has been writing ever since the day she printed her long name on her first library card.  A native of Connecticut, she graduated from Fairfield University with a degree in English, and earned a master’s degree in Renaissance studies from Trinity College, Hartford.  Fascinated by la Serenissima and the islands of the Venetian Lagoon since her first visit in 1969, Mary has returned to Venice numerous times.  A Solo Writer’s Fellowship from the Beatrice Fox Auerbach Foundation afforded her the opportunity to live and write in Venice during July, 2010.  Mary teaches writing and chairs the English Department at Chase Collegiate School, Waterbury, Connecticut.  With her husband Wayne, she leads her writing students on “slow travel” tours of Italy, the country she considers her second home.

Thank you for this great post, Mary. I heartily agree (as both an avid voracious researcher and fiction writer) that fiction provides all those pieces of people and events that history manages to omit.