When I first drafted this post, I found myself writing quite a lot about the history of the Etruscans.  That, however, is not the task of this blog, which exists to talk about the process of historical fiction research, not its results.  If someone wants to know about the Etruscans, they have many options available to them, and I hope they will take advantage of them.

But for me, the relevant question here is:  What did I learn from being in Etruscan sites that I could not have learned from books?  What was it that I experienced that brought me closer to my goal - a stronger, more  intuitive understanding of this fascinating culture?

First, I learned something of what it means to live on a promontory.  Yes, I knew the Etruscans built on high ground.  Yes, I knew that they practiced divination by watching the flights of birds and by observing lightning.  But it wasn't until I stood on one of those high hills and looked down at all of the circling, spiralling birds that I had an inkling of how it might have appeared to a haruspex trying to divine the future through those swooping, graceful motions.

It wasn't until I watched a thunderstorm approach us over the plains and valleys and watched the lightning arc over the next hill that I had a feeling of how such phenomena actually looked and felt, and for an instant, I shared with the ancient Etruscans a sense of awe, and of the raw power of lightning.

I've read the disapproving words of the Romans as they wrote about their Etruscan neighbors - too pleasure-loving, too much freedom and power given to women, too violent (and this from the Romans?!?).  It's not exactly fair and balanced.  I've read the modern histories and archaeological reports, with their detailed descriptions of art - Greek influence, meaning, levels of skill.  I've seen the artifacts, removed from Etruscan tombs and displayed primly in museums with informative labels.

But nothing prepared me for the experience of walking down steps into a tomb dug out in the sixth century B.C. and seeing the pictures on those ancient walls:  the dancers, the musicians, the games, the animals, the feasting, the exotic clothing, the activities of everyday life, rendered with a vividness and an exuberance that stuns the observer.  You cannot walk away from those tombs without carrying with you a living, moving mental picture of the Etruscans.  And now that I've had that experience, nothing in the way I view the ancient world - not the Etruscans, the Romans, or the Greeks - will ever be quite the same.


There.  That was what was important.  Now I give you the blog as I originally wrote it, for those who are interested.


Tarquinia.  This small Italian city, only about 60 miles north of Rome, has a venerable history.  The town we see today, medieval in appearance, is not situated at exactly the same location as the ancient Etruscan city (which the Etruscans called Tarchna and the Romans called Tarquinii).  Rather, today's city (which is that of the middle ages) is on the edge of the Monterozzi plateau where the Etruscan necropolis is located, and the deserted site of the ancient city is on the next hill over, the promontory known as Civita.


Today's Tarquinia was known as Corneto in the middle ages and renamed Corneto-Tarquinia in 1872, but in 1922 a resurgence of interest in Italy's distant past prompted the return to the ancient name of Tarquinia.  Both versions of the city, old and older, are near but not on the coast; a port called Gravisca allowed the Etruscans to be a major naval power and facilitated trade, yet the Tarquinians lived on a defensible hill nearby, away from the malaria-infested coastal lowlands.

Tarquinia was a major player, perhaps the major player, among the twelve cities that defined Etruria (see map in previous post).  Fortunately situated in a rich agricultural region and with access to equally rich mineral resources, it became a wealthy and powerful city as early as 750 B.C.

When D.H. Lawrence made his tour of Etruscan sites in 1927, he didn't seem particularly taken with Tarquinia as a city.   He complained about officials being officious, about the food, about transportation difficulties.  (At least he didn't have to join a third-grade class in order to get into a tomb, as we did at Chiusi a couple of years ago.)  He did, however, have a great deal to say in praise of the necropolis and its famous painted tombs, which show many exuberant and lively scenes from Etruscan life.


Here's Lawrence on the Tomb of Hunting and Fishing:

"...quick with life, spontaneous as only young life can be.  If only it were not so much damaged, one would be happy, because of the young liveliness of it.  There is nothing impressive or grand.  But through the paleness of time and the damage of men one still sees the quick ripple of life here, the eternity of the naive moment, which the Etruscans knew."


We, on the other hand, loved the town.  Italy is replete with medieval cities that have been tarted up for the tourists, and Tarquinia is emphatically not one of those.  San Gimignano touts its towers, but Tarquinia has imposing towers as well.  Cortona, the City of Art, seems constantly to be posing for pictures, but Tarquinia is simply a town, a very old town, where people still live.  And when we asked one new friend how long her family had been there, she looked puzzled at the question and responded, with a shrug, "Sempre."  (Always.)  But they live as neighbors to Etruscan tombs dating back to the Iron Age (though the painted tombs first began to appear in the late seventh-early sixth century B.C.), and they live amid massive medieval buildings which often incorporated stones quarried from the ruins of the earlier Etruscan city.

Some images of Tarquinia: 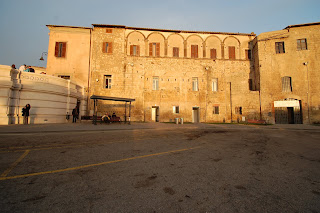 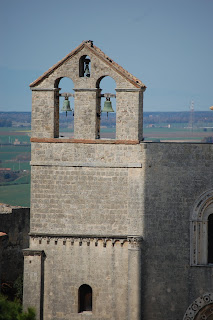 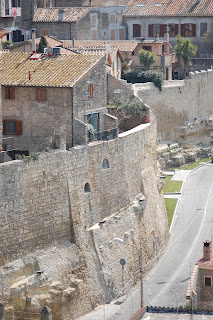 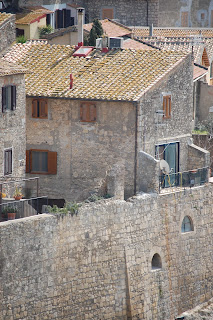 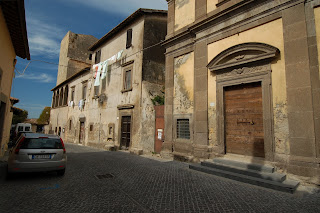 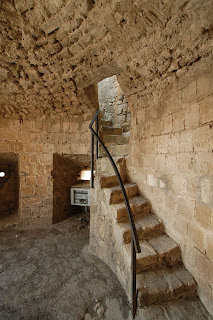 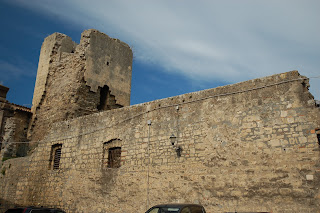 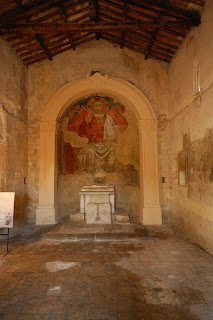 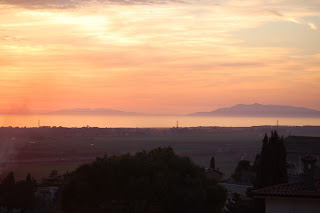 What draws the tourists - though they are probably just day-tripping from Rome - today is the necropolis, and the painted tombs.  Tarquinia is home to perhaps as many as 6000 known tombs, though only 180 of these are painted.   Those 180 tombs comprise about 80% of the known painted tombs in all of Etruria.  (Numbers from Tarquiniia:  An Etruscan City by Robert Leighton.)  Of these, perhaps 30 are currently accessible, and around 15-20 are open to visitors on any given day.

These tombs, dotted all across the necropolis area, each consist of a mound, an underground tomb, and a modern hut leading to stairs down, where the visitor switches on a light and peers through a glass door to view the frescoes, many of which are startlingly vivid, despite their age.  The rich pigments include yellow from iron, blue from lapis lazuli (possibly imported from Egypt; its use is more prevalent in later frescoes), black from soot or charcoal, red from iron oxide, and green derived from some combination of copper, malachite, flint, and calcium.


The Monterozzi necropolis is now a UNESCO site, with the tomb paintings protected and climate-controlled, but that is a fairly recent development, and centuries of weather erosion and tomb robbers have taken their toll.  Tomb robbing is still going on; there is a market for these antiquities, and it is virtually impossible to police the vast area of the necropolis effectively.  Little to nothing was left in most of the tombs of grave goods or human remains (though some few were, fortunately, discovered still intact), but the paintings remain, though some are badly damaged.  The frescoes from a few of them (the Tomb of the Triclinium, for example) have been removed from their original sites and installed in the archaeological museum in town.


We were fortunate in that during the time we were in Tarquinia it was possible to gain access to several tombs not usually open to the public, by hiring a guide.  We chose to do this, joining a charming Dutch couple, and followed Tarquinia local Claudia into a half dozen more tombs, in an area somewhat distant from the tombs open to the public.  Among these tombs was the oldest we saw, and my favorite, the Tomb of the Panthers.  I do not have a picture to post - we were not able to get a usable photo, and I could not find a copyright-free picture - but if you follow this link you will see these beautiful, stylized cats.

Also on this tour was the remarkable Tomb of the Bulls.  I've given you an image of one of the frescoes, and also our (rather blurry) photo of the tomb as seen from the doorway, to give you an idea of the context.  You will see the image on the far wall.

And with that, we bid a reluctant farewell to Tarquinia, a city I'll return to in a heartbeat if I get the chance. Next time we'll look at a very different kind of Etruscan necropolis, at Cerveteri. 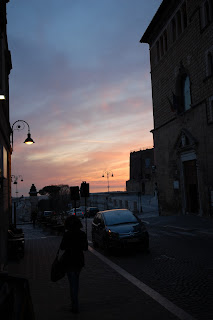 Images in this post:  Winged horses from Wikimedia Commons,  Creative Commons Attribution-Share Alike 3.0 Unported license.  Other images either our own, or in the public domain.
Posted by Tinney Heath at 9:17 AM

Brava! Your first part of this post is very well put. I wish we could have stood on that high hill with you. Wow.

Your second part is also wonderful; I'm so glad you decided to include it.

I find it interesting that the tomb frescoes, especially in their composition, but also somewhat in artistic style (most strikingly those big cats, are not that different from many of the ancient Mayan images I've spent pleasant hours gazing at (in reproductions in books, sigh). Surely the fundamentals of visual art must be deep in the wetware of our brains.

I think you're right. I kept thinking, while looking at those frescoes, that the sinuous lines of the animal drawings seemed to evoke ancient cave paintings. And many of them - like the cats - were very stylized.