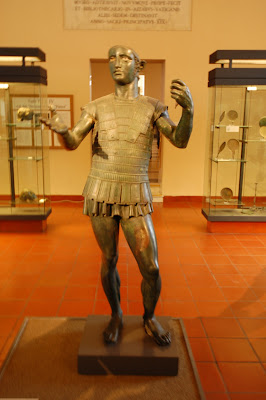 We've just returned from a research trip to Italy, in search of the Etruscans.  It was absorbing, fascinating, fruitful, and completely unlike any other research trip I've taken in years.  In fact, it completely blew me away - not unlike the fellow shown above.  (He's known as the Mars of Todi, and his somewhat acephalic condition is due to a lightning strike.  Lightning being sacred to the Etruscans, he was then buried between two travertine slabs, not to be discovered for another two and a half millennia.)

Wait, you may be saying.  You write about the middle ages, so what are you doing pestering the long-dead Etruscans, anyway?  And how can one research trip be that different from any other research trip?

As to why a medievalist is suddenly interested in Etruscans, I can only say that I do have other interests besides Dante's Florence, and every now and then one of them will demand attention. Once when I was in high school, a teacher spoke dismissively of people who studied the Arthurian legends, implying that such interests were irrelevant to today's world.  I gathered up my courage to speak (I was very shy) and finally stammered out something like, "But Arthurian legends are interesting things to be interested in... if you're interested in that sort of thing."

Okay, it wasn't my finest academic moment, but I felt it passionately, and my teacher was gracious enough to backpedal his position a bit.  And so my only excuse for this trip is that Etruscans are interesting people to be interested in, if you're interested in that sort of thing.  And I am.

As to why this trip was unlike other research trips, the main difference lay in my level of knowledge.  When it comes to Etruscans, I have very little.

With Dante's Florence it's different.  I've been studying this area for a lot of years now.  The last time we went to Florence, what I sought was specific information, such as whether someone at the top of a particular tower could see the end of the Ponte Vecchio or not, and how many people could have fit in the little piazza in front of a particular small church.  When I attended a series of evening lectures on the history of Florence in Dante's time, I looked down at my notebook at the end of the final session and found that all I had written was "Not that simple."  While I don't claim expertise, and there are still plenty of holes to plug in my knowledge, I'm not a beginner.

But with the Etruscans, I am.  I tried to learn everything I could before we made the trip, but time ran short and our departure date loomed well before I had sorted out all the differences between the archaic period and the hellenistic, for example, or could even remember the modern names of all of the twelve major Etruscan cities. 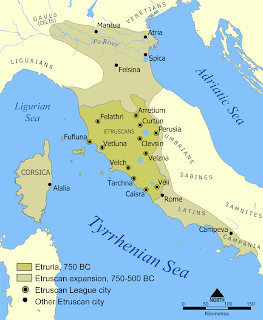 So off we went anyway, underprepared as I was, and I determined that the best thing to do was to open myself up as completely as I possibly could to what I saw and experienced, and just see where that took me.

Where it took me was somewhere wonderful, and someday I hope to write fiction about it and take other people there, too.

Our trip paralleled, in many ways, a trip taken by writer D.H. Lawrence in 1927.  In the last years of his life and facing health problems (he died in 1930), Lawrence was particularly receptive to Etruscan attitudes toward life and death - inescapable on such a trip, because all we have left of their culture is their spectacular array of tombs, carved and painted and utterly mysterious.  They lived in houses of wood, which have long since disappeared, but they - the wealthy among them, at least - housed their dead in elaborate dwellings carved into tufa and carefully prepared for a luxurious afterlife.

Their tomb paintings - of feasts and hunts, dancing men and women, musicians, rites of divination, food preparation, real and fantastic animals, supernatural beings, games and athletic contests, trees and garlands, tents and furnishings - tantalize us, telling us at once so much and yet so little about this vanished culture.  Little is left to us of Etruscan writing, and much of that concerns religious ritual or divination, so we must rely on these frescoed tombs (and on what remains of their contents after an onslaught of tomb robbery, souvenir hunting, and poorly-conceived archaeology across several centuries) to try to understand how the Etruscans lived. 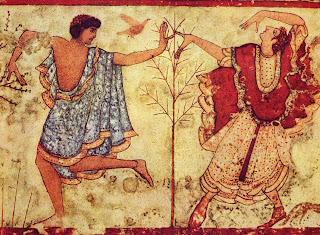 From the Tomb of the Triclinio, Tarquinia

Lawrence saw in the Etruscans a people brimming over with life and energy.  Here's some of what he had to say about them, based on his impressions in 1927, exploring many of the same tombs we just saw:

"The curves of their limbs show pure pleasure in life, a pleasure that goes deeper still in the limbs of the dancers, in the big, long hands thrown out and dancing to the very ends of the fingers, a dance that surges from within, like a current in the sea.  It is as if the current of some strong different life swept through them, different from our shallow current today; as if they drew their vitality from different depths, that we are denied. ... To the Etruscan, all was alive:  the whole universe lived:  and the business of man was himself to live amid it all.  He had to draw life into himself, out of the wandering huge vitalities of the world.  The cosmos was alive, like a vast creature." (taken from Sketches of Etruscan Places, D.H. Lawrence)

We started our journey in Rome, mostly to see the Etruscan museum in the Vatican museum complex (having already seen Rome's other major Etruscan museum, the one at the Villa Giulia, on a previous trip).  While there, we made the obligatory visit to the Sistine Chapel, and I'd just like to point out that Michelangelo's blue Charon is thought by many to have been modelled on the Etruscan demon/guide Charu (as are the demons in some of Luca Signorelli's frescoes). Michelangelo is said to have explored some Etruscan tombs and to have been familiar with some Etruscan bronzes, and to have been influenced by them. 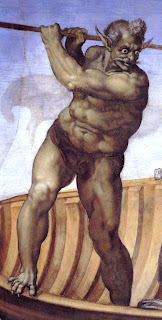 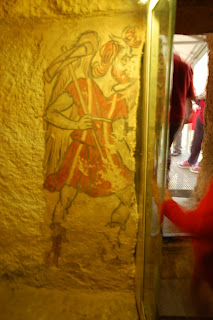 There wasn't much to see of the Etruscans in Rome, outside of the museums.  Rome is quintessentially Roman.

The Etruscans, after all, got there first.  They had thriving cities while Rome was a small village of salt-traders.  Three of the seven kings of Rome were Etruscan (Lucius Tarquinius Priscus, Servius Tullius, and Lucius Tarquinius Superbus).  Perhaps - just possibly - they made their mark on Roman culture.

Lictors?  Those Roman civil servants who acted as bodyguards to the VIPs who had imperium, or the right to command?  Very Roman, indeed, but the Etruscans had them first.  The twelve cities of Etruria, each of which used to have a lictor, determined the number of lictors that served Rome. 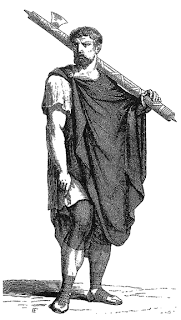 Fasces?  Those bundles of sticks with an axe in the middle?  Those, too, were Etruscan.

The famous rape of Lucretia?  Done by an Etruscan, Sextus Tarquinius, son of the last king, Tarquinius Superbus.  (Maybe not such a good claim to fame, considering it resulted in his dad's exile, the end of the monarchy, and the beginning of the Roman republic, but still, there it is.)


Rape of Lucretia, by Jan Sanders van Hemessin (1500-1579)  (I know the story of her suicide, but I still think she's pointing that knife at the wrong person.)

It was an Etruscan haruspex, Titus Vestricius Spurinna, of a distinguished Etruscan clan, who gave Julius Caesar the famous warning about the Ides of March.

Emperor Claudius's first wife, Plautia Urgulanilla, was Etruscan (he divorced her for adultery), and he wrote a history of the Etruscans, unfortunately lost.

The first of the Etruscan kings, Lucius Tarquinius Priscus, established the Circus Maximus and constructed the Cloaca Maxima (Great Sewer).  He was the first to celebrate a Roman triumph, wearing the robe of purple and gold that was an Etruscan tradition. 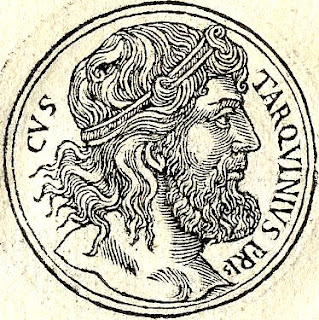 Even the Capitoline she-wolf, that ultimate symbol of Rome, has long been said to be an Etruscan statue (though recent scientific dating suggests that it may instead be medieval in origin, and even though those results are not yet clear, the two suckling infants are certainly not original, and in fact are probably Renaissance additions, often attributed to Pollaiolo). 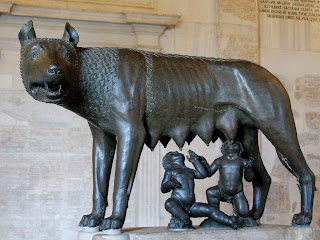 Some art historians may tell you that many of the themes and motifs we are familiar with in Roman, medieval, and Renaissance art originated with the Etruscans:  nursing mothers, mothers with their children, couples, winged figures, demons, ghosts, dismemberment, and human sacrifice among them.

Rome whetted our appetite, but the next stop - far from Rome's frantic traffic and crowds - was little Tarquinia, only 28 miles from Rome, and yet a world away.

Next time, In Search of the Etruscans - Part 2, Tarquinia.  Please join me.

Images in this post:  The map of Etruria is from Wikimedia Commons, Creative Commons Attribution-Share Alike 3.0 Unported license.  All other images are either in the public domain or are our own photos.
Posted by Tinney Heath at 6:00 AM

Email ThisBlogThis!Share to TwitterShare to FacebookShare to Pinterest
Labels: Etruscan