The Real Lions of Florence


Florence has a thing about lions.  Stone lions, heraldic lions, and painted lions abound.  But for hundreds of years, until not so very long ago, they also had the real thing.

The street behind the Palazzo Vecchio (Florence's town hall, formerly the Palazzo della Signoria) is called via dei Leoni, not so much in honor of these noble beasts as because they were once housed here, living symbols of a proud city.

But via dei Leoni was neither their first home nor their last.  Florence may have kept lions as early as the 12th century, and certainly had them by the middle of the 13th, which was well before the construction of the Palazzo della Signoria.  At that time, they may have been housed in and around an earlier public building, the Palazzo del Popolo, begun in the year 1255 in the middle of the brief ten-year period when the city was ruled not by the nobles and magnates, but by the Primo Popolo (merchants and guildsmen, for the most part).  That building has been through many changes of name and function; today it is the Bargello, containing Florence's sculpture museum.  A different account suggests that they were caged in an area where today we find the Loggia del Bigallo.  Wherever they were, it was possible to purchase a ticket to see the lions.

In the middle ages and Renaissance it was not unusual for nobles and rulers of cities to present gifts of exotic animals to one another.  Eric Ringmar, writing in the Journal of World History, says that "the vast majority of foreign animals kept in Italy had come from Muslim rulers--initially from the sultan of Egypt and, after the fall of Constantinople to the Turks in 1453, from the sultan of Istanbul."  He adds that in the 15th century Florence maintained no fewer than 25 lions.

And certainly lions are not the only exotic animals Florentines kept in their menageries; there's the sad history of Lorenzo de' Medici's giraffe, who broke his neck caught in the ceiling beams of the structure built to house him; and there are tales of leopards used for hunting, as well as many other animals of non-Tuscan origins.

But the lions were always special. The historical record of these creatures is spotty, but contains some fascinating glimpses of what it must have been like to keep such fierce and demanding animals in a crowded city.  The earliest incident I've read about, illustrated above in a manuscript of Giovanni Villani's history of Florence, is the tale of Orlanduccio of the Lion.

Somewhere during the ten-year reign of the Primo Popolo, one of the city's lions escaped from its enclosure and ran through the streets of the city, spreading panic.  It seized a small child, a little boy named Orlanduccio.  Orlanduccio's distraught mother, who was widowed, saw her only child in the clutches of the beast and promptly snatched him back.  Both child and mother remained unhurt, and - presumably - somebody eventually enticed the big kitty back to its home.  Ever after, the boy was known as Orlanduccio of the lion, and it was said that he was spared because it was his fate to grow up and avenge his father's death, which he eventually did.

As a mom, I've always thought that it should have been the brave mother's name that came down to us, not Orlanduccio's, but maybe that's just me.  Here's a later, more melodramatic depiction of the incident: 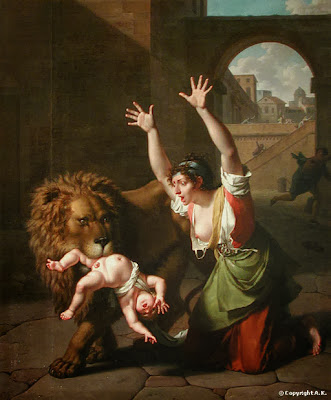 Naturally, given the symbolic significance of the lions to Florence, births or deaths among them were important events, and often considered to be omens, good or evil.  A popular belief during the middle ages, one that is often seen in poetry, is the idea that lion cubs were born dead and then came to life as the mother licked them.  A chronicler thought it important to note that a litter of lion cubs in the early 14th century had been born alive, and not dead, and the birth of six cubs in June of 1337 was cause for rejoicing.

Another anonymous chronicler, writing at the very beginning of the 15th century, reports an incident in November 1391, in which a fight among the city's lions resulted in the death of a pregnant lioness, killed by seven of her fellows - an evil omen indeed, particularly since she had already produced many cubs for the honor of the city.

In 1302, another lion met its demise, to the consternation of the Florentines.  This one had been a gift from Pope Bonifacio VIII, which may have made the incident doubly significant.  A young lion, probably a cub, was chained in the courtyard of the Palazzo della Signoria when an ass, laden with a load of wood, approached.  "Either through fear or through a miracle," says Villani, the ass kicked the cub to death, even as panicked Florentines tried to save it.  When the pope died in the following year, the cub's death was said to have been an omen.  Villani cites "the prophecy of the Sibyl":  "When the tame beast shall slay the king of beasts, then will begin the destruction of the Church."   I suspect the ass didn't survive, either, and I wonder what happened to the poor guy who was just trying to deliver his wood.

In another instance of lion-as-portent, two lions escaped into the city's streets just before the violent demise of Corso Donati, leader of the Black Guelf party, in 1308.

And in yet another, it is said that among the many portents presaging the death of Lorenzo de' Medici in 1492, one of the most alarming was that the city's pair of lions locked in lethal combat and killed one another, either at the moment of his death, on the day of his death, two days before, three days before, or a few months before, depending on which record you read.   (Among the other signs, according to Florentine coppersmith Bartolomeo Masi:  lightning struck the pinnacle of the cathedral; a woman ran from Santa Maria Novella screaming something about a bull with flaming horns; torches were seen to move from Medici graves at Fiesole to their villa at Careggi for three nights in a row; flames burned on the fortress at Arezzo and beneath the walls a she-wolf howled; and an unusually bright star loomed over Careggi and disappeared at the moment of Lorenzo's death.)


The lions were also used for spectacles, to impress visitors.  Sometimes this worked; other times, not so much.  In 1459, when Pope Pius II visited, Florence decided to stage a series of combats, Roman-style, between different types of animals.  They blocked off the streets leading up to the Piazza della Signoria.  First lions were let in, then wolves, wild boars and horses, bulls, and Corsican dogs.  Twenty young men were hidden inside a large manniquin of a giraffe; their job was to agitate the lions to cause them to attack the other creatures.  While they gave it their best, the lions simply weren't interested, and much to the organizers' embarrassment, the citizens jeered.  Perhaps the giraffe's inhabitants just weren't annoying enough.

In a letter written by Alessandra Strozzi in the 15th century, she complains, "The lion hunt vituperated us, for a bull chased them all into the stalls like sheep."  Oh, dear.  Not good for the city's prestige, not at all.  The Florentines must have been tempted, at least momentarily, to change the city's symbol to a bull.

We even have a surviving shopping list that includes the cost of lion chow.  The year was 1336, and the food for the city's lions (along with torches and candles) came to 2400 lire.  By means of comparison, the city's musicians and heralds, including trumpeters, drummers, shawm players, and ten herald trumpet players, cost the city only 1000 lire for that year.  The lions must have eaten well.

It wasn't until the year 1777 that Florence ceased keeping lions in the city.  Still, their symbolic value was not forgotten.  One has only to look at all the statues of lions all around the city.

Among the stone beasts, the Marzocco is, famously, the symbol of the Republic of Florence.  You see versions of him everywhere.  By the 1300s, a medieval sculptured lion was the only statue in the Piazza della Signoria.  (The many other statues which now grace the piazza are later additions, from the late 15th century.)  The most famous Marzocco is the one sculpted by Donatello in 1418-20, now in the Bargello Museum, but a faithful copy still stands outside the Palazzo Vecchio:

Also famous, and spawning copies all over the world, are the two Medici lions which originally graced the Villa Medici when it was owned by Ferdinando I de' Medici, Grand Duke of Tuscany, in 1576.  Since 1789, these two stone beasts have flanked the Loggia dei Lanzi in the Piazza della Signoria.  One is ancient, from the 2nd century BC, and may have originally been carved in relief and then carved free of its background for Ferdinando by sculptor Giovanni di Scherano Fancelli, about whom little is known.  The other, sculpted as a companion for the first, was carved by Flaminio Vacca between 1594-1598.

But real lions are not compatible with hordes of tourists, so if you are in Florence today and have an urge to gaze upon a real, living, breathing lion, you will need to make a short trek to nearby Pistoia and visit their zoo.

So let's tip our hats to the Real Lions of Florence, and, while we're at it, to Orlanduccio's courageous mom.

Images in this post are in the public domain with these exceptions:  Creative Commons Attribution-Share Alike 3.0 Unported license in each case, to Kandi (Bargello), JoJan (Palazzo Vecchio), and Sailko (both Medici lions and the Marzocco).

My husband and I are both reading your book A Thing Done and loving it. We know a lot about the history of Florence and Italy in general. Actually, we just did a do-it-yourself tour of the Dante plaques around the city...we found 27 of the 32 plaques. (I found out about all of them while doing research on Dante in the library, where I stumbled across a 1933 book called Dante's Florence, cant recall the author, which has a short chapter on each of the plaques. I recently took a course in La Commedia, which my husband had not read since Inferno in high school It was fun to tell him about Boundelmonte and then to have your book to start reading. Can't wait to read your other books. This one is definitely a fun read.

Thank you. I'm happy to hear that you're enjoying it. You've found more of the plaques than I have - must try harder, next time! I first encountered Dante in high school, too, but it was a more recent reading, after I'd learned some Italian, that really got me going on pre-Renaissance Florence. So many stories to tell...

I had no idea that lovely Florence had such a lion-hearted past. 500 years of resident lions, wow! And thanks for my new word of the day, "vituperated." I'll see if I can work that into my next conversation. ;>)

Yes, Florence was pretty leonine. Maybe in the medieval version of "rock-scissors-paper" lions trumped the imperial eagle. And I guess we have Alessandra Strozzi (or at least her translator) to thank for "vituperated"!

"The history of these creatures is spotty"--perhaps you should have been discussing leopards while writing about the big kitties. Sorry, you've got me laughing as usual with your delvings into Florentine history (this is a good thing). I love your ability to tell straight history with the occasional tongue in cheek. Highly entertaining.

LOL! They did use leopards for hunting, actually. I'm glad you like my sometimes irreverent approach to history. I inherited a certain whimsey from my dad, and I don't think I could pry my tongue out of my cheek if I tried!

Oh do please leave tongue in cheek! Way too many people taking themselves too seriously anyway.