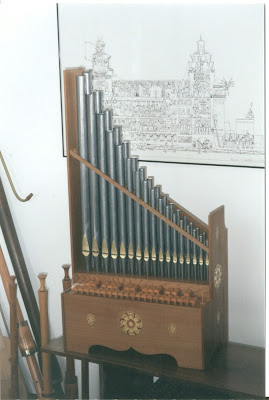 See that pretty instrument?  That's my baby - my gorgeous handmade portative organ, created in the Netherlands by a master organmaker (Winold van der Putten), owned by another musician before me, and constructed based on information contained in a 15th-century treatise.

I play it a lot.  It's tuned to a period-appropriate Pythagorean scale, and it makes a perfectly lovely sound.

Most of the time.

But lately it developed an alarming air leak.  The bellows pressure dropped so rapidly that I'd be flapping my left arm like a hysterical one-winged chicken, just trying to keep enough air flowing to make some noise.  (The bellows is in back; I pump it with my left hand and play the keys with my right.  The instrument sits perpendicular to my body.)

Then, to add to my dismay, it started whistling a rather whiny-sounding E-flat every time I pumped the bellows.  I could gently whack the key and it would stop, but it kept starting up again.  When it started whistling a D as well, we could no longer ignore the problem.  After all, there isn't much medieval music that works with an involuntary drone of D and E-flat, played simultaneously.


To make this long story shorter, my clever husband eventually figured out that the poor organ was protesting the low humidity in our house.  Once we hauled a humidifier into the living room, the instrument, now happy once more, miraculously healed itself and stopped whistling unpleasant intervals while hemorrhaging air.

But it's taken a while to sort it out, which means I've been thinking about portative organs a lot of late.  Hence this little post, which may well turn out to be mostly pictorial, because there are so many illustrations of these instruments available.

First, though, let me provide you with some YouTube links, in case you are unfamiliar with the sound of this instrument.  In all cases, the organist is Jankees Braaksma, founder and leader of the Netherlands-based medieval music group Ensemble Super Librum.  He plays a different instrument in each of these three performances; all are made by Winold van der Putten, who you can see in the third example.  Enjoy!

The organ is a very ancient instrument, invented - some say - in Alexandria in the third century BC by one Ktesbios, a Greek engineer.  Pliny the Elder called that instrument "one of the wonders of the world."

Hydraulic organs were well known to the Romans.  Cicero said their sound was "as agreeable to the ear as the tastiest fish is to the palate" (Pliny and Cicero quotes are from David Munrow's book Instruments of the Middle Ages and Renaissance).


These early instruments did not have a keyboard.  The notes were sounded by pushing or pulling wooden "sliders," and it was a tricky and cumbersome process.


The evolution of the instrument is frustratingly difficult to reconstruct, with stops along the way in Byzantium, the Middle East, and the court of Pepin the Short.  So let's focus on small organs from around 1300 - not big church organs, but the kind that can be moved around and played without a committee.  (Some of the earliest larger organs required as many as four men to pump the bellows and two more to work the sliders.)

At this point (turn of the 14th century), we encounter two basic types of small organs:  portative organs and positive organs.  What's the difference?

A true portative is small, and light enough to be played on one's lap, or to hang from a strap around the player's neck.  It is monophonic - it may have a couple of drone pipes, but otherwise the player will only be sounding one note at a time.  It may well be diatonic (no sharps or flats).  It's played by a single musician, who pumps the bellows with one hand and plays the keyboard (which has evolved by now into something we would recognize) with the other.  It's in the treble range.


A positive organ is portable in the sense that it can be moved, but not by one person alone.  The instrument rests on a table or other surface while being played; multiple notes can sound simultaneously; the player sits in front of the instrument and uses both hands on the keys, while someone else pumps the bellows from behind.  It has a larger range than the portative, being substantially bigger, and may be more likely to include sharps and flats, though by the time we get to the 15th century all sizes will have become all or mostly chromatic.


Often you will see angels or saints playing portative organs in late medieval and Renaissance art.  Saint Cecilia, in particular, is associated with the instrument.

Musicians in the 14th and 15th centuries took pride in being organists.  The blind Florentine composer Francesco Landini is shown with the portative that was his trademark instrument, both on his tombstone (in San Lorenzo, in Florence) and in an illustration of the pages devoted to his compositions in the ornate Squarcialupi Codex.


David Munrow quotes a novella by Giovanni da Prato concerning Landini:  "... a thousand birds were singing.  Francesco was ordered to play on his organetto to see if the singing of the birds would lessen or increase with his playing.  As soon as he began to play, many birds at first became silent, then they redoubled their singing and, strange to say, one nightingale came and perched on a branch over his head."

(Personally, I don't know if I'd want a bird perching over my instrument, but so far it hasn't come up as an issue.)


And here we see Paul Hoffhaimer (1459-1537), Austrian composer and organist, who served at the court of Archduke Sigismund and, later, at the court of the Emperor Maximilian.  Hoffhaimer, who was knighted for his musical prowess, here has figured out a way to make a positive organ truly portable.


And my instrument?  It seems it's neither fish nor fowl.  Like a medieval portative, it is played and pumped by the same person, but it can also be played as a positive, with a second person pumping.  It is far too large and heavy to set on my lap, or to walk with in a procession.  It plays (or will, if I ask it to) more than one note at a time.  It can be lifted by one person - a strong one, because those pipes are lead, and they're heavy - but not carried far.  It is almost fully chromatic (minus a B-flat at the very top of the range).  It is in many ways more positive than portative, but it seems actually to be somewhere in between.

I would guess that there may have been many instruments in the 13th, 14th, and 15th centuries that were also hybrids, with characteristics of both types.  I'll finish this post with a few more illustrations to show the many variations in size and design that we find in the iconography.

And whatever mine is, I'm just glad it stopped being OCD about E-flats!


Illustrations in this post are in the public domain (because of copyright expiration, more than 100 years having passed since the death of the creator, or because the creator has released the image into the public domain) with one exception:  the angel musician is copyright Carlets, via Creative Commons Attribution - Share Alike 3.0 Unported license (Wikimedia Commons).  All captions (except our own photos) have links to their Wikimedia Commons pages for more information.
Posted by Tinney Heath at 8:33 AM

Great Post! I love your medieval organ, what a lovely possession to have!

Thanks! I feel very lucky to have it, and it's a joy to play (when it's behaving itself, anyway...).

Just what I need as I'm currently writing a dark fantasy short story in which the protagonist plays some kind of bellows organ. You are lucky to own such a wonderful instrument.

Hi, Roy. You're right - I do feel lucky. I'd love to read your story when it's published. If you drop me a note and let me know where to find it, I'll seek it out.

Hi there! My 8 year old daughter is presenting her Saint report on Saint Cecilia. I would love to try and replicate a portative organ (rather then the over used viola/violin). Would anyone have any suggestions on how I might go about this?

Thank you in advance,

Hi, Lyn. I'm not quite sure whether you want a working instrument, or more of a costume component. You can buy a kit from the Early Music Shop in England http://www.earlymusicshop.com/product.aspx/en-GB/1000334-ems-1ft-portative-organ but it is pretty pricey, and not that easy to assemble. As for just achieving the appearance of one, I'm afraid I lack the artistic skills to help you there. Sounds like a great project - good luck!

I am not sure if your sentence "These early instruments did not have a keyboard" applies to medieval instruments only or Greco-Roman instruments.

The Greco-Roman hydraulis, and subsequent bellows organs from the antiquity did have keyboards. They are described by Hero of Alexandria and Vitruvius.

Only in the Middle Ages did proper keyboard disappear for a while and got replaced with much simpler sliders. So the technology went back for a while.

Eric, I'm not familiar with the earliest origins of the keyboard; I'm aware of a medieval period where what functioned as a keyboard did not resemble a modern keyboard, but I had thought that sliders were also present in some instruments at an earlier, pre-medieval stage - don't remember where I picked up that idea. Thanks for your comment. When I have time, I'll look into the earlier instruments more closely, though that's not where my primary interest lies.