In Search of the Etruscans - Part 3: Cerveteri

Cerveteri (Caere in Etruscan times) is a pleasant Italian town located between Rome and Tarquinia.  At first glance there isn't much to indicate that it was once prominent among the twelve Etruscan metropolises, the southernmost of Etruria's band of coastal cities.  And yet Cerveteri, with its three ancient necropolises, has contributed a tremendous amount to Etruscan archaeology and scholarship.

Some of Etruria's most spectacular finds come from Cerveteri, having somehow eluded tomb-robbers over the centuries.  The Regolini-Galassi tomb in the Sorbo necropolis, not open to visitors, yielded such treasures as the large fibula shown above, and the two items shown below, all three displayed in the Etruscan museum in the Vatican Museums in Rome. 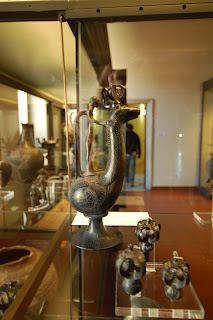 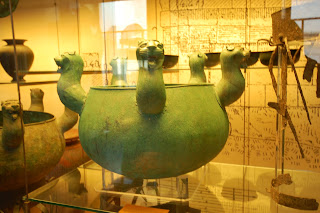 In the centuries when Rome and Etruria coexisted, before Rome gained the ascendancy and conquered the Etruscan cities and eventually absorbed the Etruscan people, there was a time when Cerveteri was in closer cahoots with Rome than were the other Etruscan cities.  (What exactly is a cahoot, anyway?  Anybody know?)  In fact, in the year 390 B.C., Rome, under threat of invasion from the Gauls, sent the Vestal Virgins to Cerveteri to keep them safe until the danger was past.  In recognition of that service, Rome awarded Caere honorary citizenship (though without voting rights). The special relationship deteriorated not too many years afterwards.

The necropolis at Cerveteri that is open to the public is called Banditaccia, the largest ancient necropolis in the Mediterranean area at about 1,000 acres (not that the visitor is going to cover all of that territory).  This remarkable city of the dead, with its straight avenues, rows of tombs, and tumuli, was built over the course of 600 years.   Graves there range from the Villanovan period (9th century B.C.) to late Etruscan (3rd century B.C.).

It is possible for visitors to enter many of the thousands of tombs in Banditaccia.  Unlike the tombs at Tarquinia, these don't have frescoes, but they do contain interesting architectural elements - carved ceiling beams, columns, and furnishings - thus giving us some hint of what Etruscan homes and buildings may have looked like.  Since the Etruscans built in wood, we have no surviving residences, and only fragments of temples.

Here's a look inside a few of those tombs: 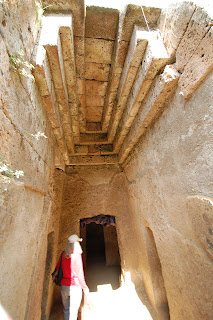 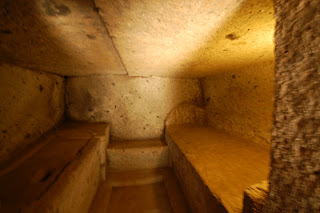 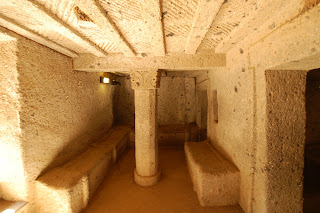 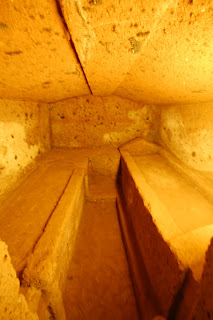 There are many simple tombs, of a single chamber, but the great burial mounds tend to contain more complex family tombs, consisting of a corridor (dromos), a central hall, and perhaps several attached chambers where bodies were laid to rest.

One extraordinary tomb, the Tomb of the Reliefs, located in the Banditaccia necropolis, has given scholars a lot of information about Etruscan daily life, because it depicts so many everyday articles carved in relief - coils of rope, tools, utensils, cushions, even house pets.  Everything one could possibly wish for in a well-furnished afterlife.

To sum up the experience of visiting this ancient burial place, I'd like to quote D.H. Lawrence, writing in 1927.  He described his reactions to the Cerveteri tombs thus:

"There is a stillness and a softness in these great grassy mounds with their ancient stone girdles, and down the central walk there lingers still a kind of homeliness and happiness.  True, it was a still and sunny afternoon in April, and larks rose from the soft grass of the tombs.  But there was a stillness and a soothingness in all the air, in that sunken place, and a feeling that it was good for one's soul to be there." 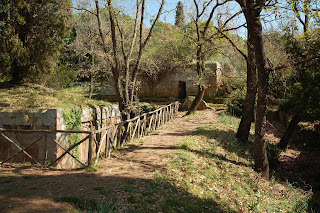 Images in this post:  Tomb of the Reliefs photo released to public domain by the photographer; all others are our own photos.

I gasped aloud when the Tomb of the Reliefs scrolled up. And that was just for the little picture. I had to click on it to get the full-screen enlargement, and I gazed long upon it, utterly entranced, while my throat choked up and my eyes misted a bit (and I had to bounce in my seat a few times to release the excess energy inside me), at the potency of the wonder of it all. This from a single photo on a laptop screen. I'm amazed that you can ever breathe while you are in Italy in person.

Thanks for posting these.

Oh, and 'cahoot/s'. I went scurrying to look it up, and of course, there is no definitive etymology, but depending on which camp of professional guessers you ask, it may either be from the French (or Canadian French) word 'cahute', which they claim means a cabin (or is it a blend of cabin and hut?), or else it comes from further south and is from 'cohort' (or other spellings/variations). So in either case, it seems to refer to one's bunkmates, buddies, and such. The word originated in North America, and, at least nowadays, is generally used in the plural, mostly in the phrase 'in cahoots with'. I guess mischief loves company at least as much as the proverbial (though not always the actual) misery does.

As for breathing while in Italy, it all balances out - for every time Italy takes my breath away, there'll be a time that it makes me gasp.