Last week I set out some of the background for the three specific examples of peacekeeping marriages I want to look at over the next three weeks.  If you missed it, scroll down or click here.  It will give you some insights into the power struggles, the Guelf-Ghibelline contests for dominance, the frequency of exile for the party out of power, and how often attempts were made to heal these rifts by crafting a marriage between a woman from one group and a man from the other.

The first couple I want to look at plighted their troth in the year 1239.  This union represented an attempt to bring Guelfs and Ghibellines together.  We do not know the given name of the bride, so I think we'll assign her one:  let's call her Lisetta.  No particular reason, just that it's a pretty name, and she needs a break, as you will see. 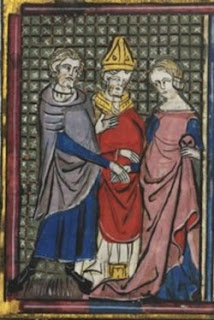 Lisetta was the daughter of the Guelf leader Ranieri dei Buondelmonti, who in turn was the son of the famous Buondelmonte dei Buondelmonti whose disastrous peacemaking betrothal in 1216 is the stuff of legend, and also the subject of my recently published novel, A Thing Done.  As the granddaughter of Buondelmonte, she well represented the Guelf party.  The chronicle tells us she was both wise and lovely.

So Lisetta and Neri were wed.  We do not know how old they were (though he was already a knight, so not just out of childhood).  We do know that it went badly very quickly, and we know that the Buondelmonti were still nursing a grudge over the events of 1216.

One version of the story says that the disaster happened at their wedding banquet, hosted by the Buondelmonti in Campo di Valdarno.  In this version, the banquet is a trap - the unsuspecting Ghibellines (Neri's family and allies - besides the Uberti, the Caponsacchi, the Amidei, the Fifanti, and other clans - and, presumably, Neri himself) attend, confident that the new marriage will prevent any untoward incidents.

They were wrong.  The chronicler known as Pseudo-Brunetto Latini tells us that at the end of the meal, someone (the bride's father, perhaps?) gave a signal, the Buondelmonti and their allies and their men turned on their unprepared guests, and before the melee was done, several men had lost their lives.  Among them, one of Schiatta's sons (Iacopo, Neri's father) and Oddo (Oderigo) dei Fifanti, also a player in the 1216 events.  They were killed by Simone Donati, a member of a family closely allied with the Buondelmonti.  You'll be hearing more about Simone in a later post.

Another version says that the incident occurred two years after the wedding, but otherwise the particulars are similar.  This seems more likely to me, because the necrology at Santa Reparata (Florence's cathedral at that time) indicates Oddo's date of death as 29 November 1241.

Whether the couple had two years of marriage or only a few hours, the chronicles report that once Neri returned from battling his in-laws, he repudiated his bride, saying harshly, "I do not want to beget sons of a traitor race."  (As far as we know he hadn't yet begotten any at this point.)  Lisetta returned to her father's house - we can only guess how she felt about any of this - and her marriage was annulled.

Her father Ranieri (who the stories suggest was the prime mover behind the ambush) then pledged her to another knight, Pannocchino de' Conti Pannucchiesci of Siena.  Lisetta protested; the prospect of being a countess was not enough to win her over.  This was not another peacekeeping marriage, but still, she had decided that her own peace was more likely to be kept if she entered a convent.  Nevertheless, she was wed against her will.

As the story goes, when the Count came to "take his joy in her in the way that was owed," she told him she could not enter into marital relations with him, because she was "already married to the wisest and best knight in Italy, messer Neri degli Uberti."

(And if you suspect that this account may have been written by an Uberti partisan, you're in good company.  A lot of historians think it may have come originally from a now-lost Uberti ricordanza, or family record.  I can certainly think of a few other things she might have said instead.)

The Count must have been rather taken aback by this, or by whatever she actually did say, but he kindly agreed to release her from her obligations and let her enter the convent.  She lived out her days in the convent of Montecelli, probably happy to be out of her family's reach, and thumbing her nose at the lot of them.

Lest you think that was the end of it, fast-forward to the peacemaking efforts of papal legate Cardinal Latino Malabranca in 1279-80.  One of the Cardinal's main aims was to reconcile the Uberti with the Buondelmonti. The Uberti were in exile; the Cardinal made the decision to readmit many of the Ghibellines including some of the Uberti, but he drew the line at letting the sons of Farinata come back into the city.  The Uberti who did return made a sort of peace with most of the Buondelmonti.


But the sons of Ranieri dei Buondelmonti would not agree.  They accepted both exile and excommunication rather than end their quarrel with the Uberti, and they rode away from Florence, still proud, still angry.  Such was the power of long years of bitter hatred.


Next week, the second couple - one of the several couples united in a peacemaking effort in 1267.

Images in this post are in the public domain by virtue of antiquity.