The crèche at Greccio


Do you know the story of the first nativity scene?

Or perhaps I should say stories, for there are several.

What they all agree on is that it was the idea of St. Francis of Assisi, and that idea first became a reality in the little town of Greccio in the year 1223.

Francis and his followers had a humble sanctuary near Greccio, a former hermitage given to them by messer Giovanni di Velita, the lord of Greccio, who - like many other residents of the town - was a devout follower of Francis and a member of his Third Order.


The sanctuary at Greccio was said to be Francis's favorite of the various properties he and his friars had been given by wealthy devotees, and it was here that he decided to reenact the nativity.  He planned it well ahead of time.  Ever a stickler for orthodoxy, he first asked permission of Pope Honorius III, who granted it.


Francis's followers set to work, building a stable near the town and stocking it with animals.  Some fifteen days before the event, Francis asked messer Giovanni to help prepare candles and torches for a procession.  This was done.

On Christmas Eve, when it grew dark, the friars and the townspeople formed an extraordinary candlelit procession, which wound its way slowly up the hill toward the little stable.  As Adrian House says in his biography of Francis, Francis of Assisi:  A Revolutionary Life, "The night seemed to light up like day and the woods on the hillside rang with the joy of the singing."

Once everyone was gathered around, a mass was said near the manger.  (It is sometimes said that shepherds and their flocks gathered around the edges of the crowd, but if so, there must have been some confused and sleepy sheep.)

Francis acted as deacon for the mass.  He sang the gospel and he preached on the meaning of Christmas.  It is said that he even imitated the voices of the animals as he told the Christmas story.


Here are a couple of details from some very ornate Neapolitan nativity scenes: 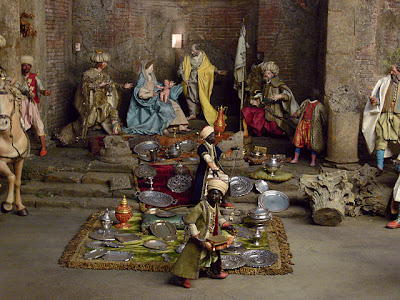 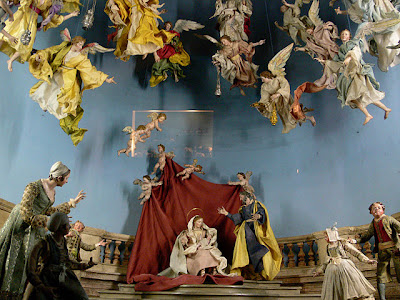 In the painting by Giotto which heads this post and which is part of his cycle on the life of the saint in the Basilica in Assisi, the scene is set in a church rather than in a stable.  The crib is in the choir, behind a screen, and only males are inside.  The women crowd the doorway, trying to see.  Giotto has used the back of the crucifix to clarify exactly where the scene is taking place. 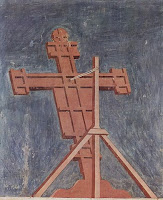 Not surprisingly, a reenactment is performed each year in Greccio.


Here is a link to a video of one such reenactment:

My best wishes to all of you for this holiday season!  - Tinney Heath