Minstrel Schools in the Middle Ages


When you get a lot of musicians together in one place, interesting things happen.

"... in 1212, when Randulf, Earl of Chester, was besieged by the Welsh in his castle of Rhuddlan in Flintshire.  He sent an appeal for help to Roger de Lacy, justiciar and constable of Chester, affectionately known in the local dungeons as 'Roger of Hell.'

"Roger, casting around for the most effective, vicious and altogether intimidating relief force he could find, realized that Chester was full of jongleurs who had come for the annual fair.  He gathered them up and marched them off under his son-in-law Dutton.  The Welsh, seeing this fearsome body of determined musicians, singers and prestidigitators bearing down on them ready to launch into an immediate performance of their terrifying arts, fled."  (Medieval Lives by Terry Jones)

As Jones points out later, these were wandering minstrels, and they had wandered to Chester because there was a fair.  No doubt they hoped to perform and earn some money; perhaps they hoped to impress a potential employer, so they could achieve some stability and lead a less hand-to-mouth existence.

But it is very likely that they also intended to use the opportunity to meet with other musicians, share repertoire, buy, sell, or trade instruments, learn new playing styles and techniques, trade gossip, talk about who might be hiring, and also just have a good time with their peers.

In the 14th century (and quite possibly earlier), it was not only the freelance musicians who sought opportunities to congregate for this valuable information exchange.  Annual minstrel schools, held in many different locations, hosted scores of musicians whose travel and expenses were paid by their employers - the nobles and municipalities of Europe, whose musical establishments were major sources of prestige for them.  (And some of them got quite competitive about it, too:  "My shawm band can outplay your shawm band!")

These minstrel schools were the occasions whose sole purpose was for musicians to meet and hobnob, to share and learn from one another.  Medieval musicians had other opportunities to assemble, but they involved other activities:  courtly weddings, visits between nobles (with their entourages), fairs, major celebrations.

Performers were a mobile lot, traveling surprising distances with surprising frequency; the result was a very cosmopolitan European musica culture.  Not that the different nations were without their separate, distinctive styles - learning these other styles was, in fact, a large part of the reason musicians wanted to get together.  But the musicians themselves were a polyglot and sophisticated bunch of travelers - the sort who today would be frequent fliers - at a time when many people never left the village they were born in.

So.  Those schools.  Let's look at the what, the where, and the when of them, having already given a bit of thought to the why. 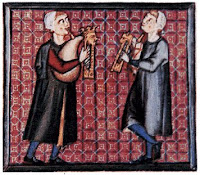 The what:  The schools were gatherings of musicians, organized and hosted by musicians, often with financial and other support from the host town, which benefited from the commerce generated by so many visitors (not to mention getting to hear a lot of music).  The 14th century schools existed primarily, though not exclusively, to serve the needs of instrumental musicians (at this point, that's what menestral usually meant, with a singer called, for example, a menetrier de bouche and a string instrument player a menetrier de cordes to make the distinction).  By this time, the role of the all-purpose jongleur was shrinking.

The where:  Sometimes more than one school was held in a single year, in two different places, but often the venue appears to have rotated among hosting towns.  The Low Countries probably hosted most of them; perhaps they were in a sufficiently central location to make it convenient.  Records are spotty and not at all centralized, but schools have been reported in all the following towns:

The city or one of its religious houses might house the visitors, or local musicians might extend their hospitality to their traveling colleagues.  In Bruges in 1318, we know that the visiting musicians bunked in an area near the Carmelite convent that even today is known as "Speelmansstrate." 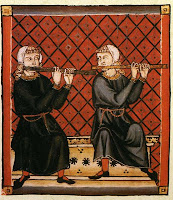 The when:  Schools were held during Lent (when the musicians' employers couldn't make much use of their services anyway), in the week before Laetere Sunday, the fourth Sunday of Lent.  That way the attendees had at least 16 days of travel time to get back home, if they could, in time for Easter, when their talents might be wanted again at home.  Also, Laetere Sunday was a bit of a break from Lenten rigors, and was even sometimes celebrated as a feast day - hence, the musicians might get a chance to perform while in their host city.

A few cities maintained more-or-less permanent schools (Paris, Bruges).  Musicians extending their musical boot camp (or waiting for more auspicious travel conditions) might while away some time at these establishments.

We have records of minstrels attending the schools throughout the 14th century and a little beyond, and around that time the schools apparently ceased to exist, or at least ceased to be a major draw for performers from courts and municipalities.  This may have been for any number of reasons, but one certainly was a rise in musical literacy among performers.  The schools served a vital function while people still depended on rote learning and memorization to acquire repertoire, but once it was possible to circulate written music and have the players able to read it, long slogs across Europe were no longer so necessary.  A bit like conferencing by Skype rather than sending your employees off on business trips.

There's also the who (no, The Who were not among the attendees... you know perfectly well I didn't mean that!  Stop grinning, Dorothy.  Though it is an interesting mental image.).  Minstrels came from all over.  Some could have made the trip home in time for Easter, but the musicians from the court of Aragon, for example, usually made it back home between the middle and the end of May.  Some years, the minstrels of John of Aragon spent half the year on the road, getting to the schools and back.  (In a year when Easter came early, some routes might have still been impassable, so the musicians would either have to leave before winter weather set in, or miss out.)

It wasn't always easy.  Minstrels are known to have died on the way, and once in a while somebody would complete the journey only to learn that he'd been replaced during his absence, and must now seek work elsewhere.

As to what these musical gatherings accomplished for the state of music in Europe, there's one intriguing example, which, while not tied specifically to a school, may very well have sprung from one.

It is unusually specific about timing, too, calling to mind a quote from David Barber's book, Bach, Beethoven and the Boys:  Music History as it Ought to be Taught:

"The Renaissance era ended and the Baroque began on March 25, 1600 at 4 o'clock in the afternoon.  No other history of music has the courage to make this statement with such conviction."

Our chronicler is not quite that specific.  But Tielman Ehnen von Wolfhagen, in his Limburg Chronicle written around 1360, does tell us this: 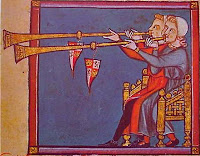 "Up to now songs had been sung long, with five or six measures, and the masters are making new songs with three measures.  Things changed also with regard to trumpet and shawm playing, and music progressed, and had never been as good as it has now started to become.  For he who was known, five or six years ago, as a good shawm player throughout the whole country, is not worth a fly [sometimes translated as 'a hill of beans'] now." (Quoted in an article by William Wegman)

So, something happened in or around 1354-5, right in the middle of the heyday of the minstrel schools, which conceptually changed musical performance, and which resulted in important changes in the quality of shawm and trumpet playing.  Do we have any idea what it was?  Of course not - we should only be so lucky.

But it sure sounds like the kind of thing that might have emerged from a minstrel school.  And if it didn't, surely it was the schools that managed to disseminate whatever it was within a half-dozen years - a lightning fast record for spreading this sort of trend in the middle ages. 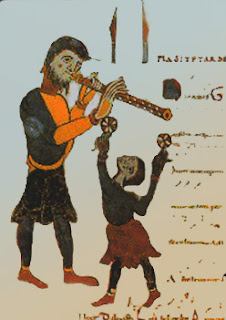 Images in this post are all in the public domain by virtue of being really seriously old.
Posted by Tinney Heath at 7:09 AM