By any other name (Automatic Translation, Part 1)

Question: What do the following have in common?

Answer: All of them are prominent 13th century Italians, Dante's contemporaries, whose names have been mangled by Automatic Translation (A.T., henceforth).

Some people love their computer games. There's nothing like SIMS, solitaire, or Farmville to serve as an expert time-waster, to abet procrastination, and to keep you distracted. I've managed to resist the siren song of cyber-play for the most part, but I do have a weakness for playing around with A.T.

Not every site provides it. I don't need it, fortunately - I read Italian well enough to get by, and it's Italian history I'm researching. But sometimes, I just can't resist the delicious linguistic loopiness that awaits, and I succumb.

In fact, I've collected so many examples worth sharing that I'm dividing this post into two parts, to fit in as many favorites as I can. This time we'll have a look at what A.T. does to names (and, to a lesser extent, to other nouns); next time we'll look at some longer excerpts, including literary criticism and political commentary.

Sometimes A.T. will read a name as a name and leave it alone, but other times it doggedly tries to translate it, never mind whether it makes any sense or not. This is how the Florentine chronicler Dino Compagni managed to emerge as Dino Similar, or in another instance the somewhat more logical Dino Companions. His fellows in the list above are, respectively, Lotto del Migliore Guadagni (his is actually is not such a bad translation, except for the lottery part); Cecchino dei Bardi; and Mosca dei Lamberti. 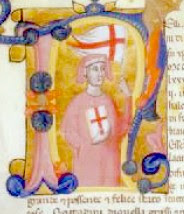 This fine fellow, while attractive enough, is not quite what I'd call beautiful, but his name is Giano della Bella, and there you have it.

The gentleman on the horse, directing demolition operations (they're freeing prisoners to help them overrun the city), is Corso Donati, cousin of Dante's wife Gemma Donati. 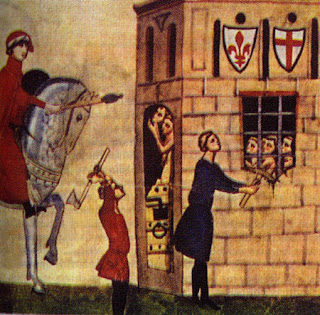 Run Donates to You

A.T. has given him the unlikely moniker of Run Donates to You. (Sometimes he pops up as Course rather than Run.) It makes a certain linguistic sense, but somehow it just isn't the same, thinking of him as Run.

It's easy enough to see from the arms of the Cerchi family, shown below, how they manage to come out as the Circles, or the Wheels. To understand how they become You Looking For, you need to know a bit of Italian. This is also, presumably, how a church under that family's patronage became St. Margaret of Looking. And how, when Corso (remember Corso/Run?) married a relative of the Cerchi, she was said to be related to "the father's side wheels." 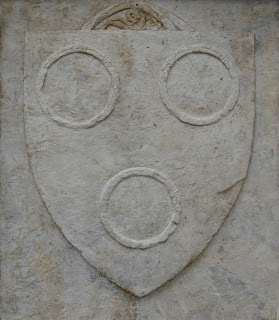 The Circles (also, The Wheels, or the You Looking For)

If A.T. thinks it is translating from Italian, it is too single-minded to let a snippet of Latin get in its way. Thus, the last will and testament of Folco (Fulk) Portinari, father of Dante's beloved Beatrice, who refers to his daughter in his will by her nickname of Bice, is found by A.T. to have willed "his bike" to the wife of Simone dei Bardi. Simone, by the way, in addition to being Bice's husband, was the brother of that Cecchino known to A.T. as Sniper dei Bardi (but then, these were violent times). 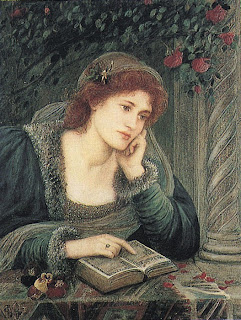 His Bike (with a brother-in-law named Sniper) 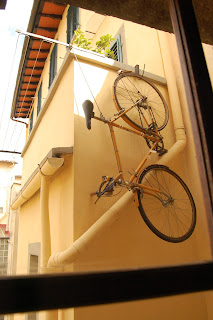 His bike? (Photographed from the Casa di Dante)

There are many and more of these, as George R.R. Martin might have said: Lapo di Cambio becomes Lapo Exchange; Sasso da Murli becomes Pebble from Murlo; Baldo dal Borgo becomes Self-Confident from the Village; Salvi del Chiaro Girolami becomes It knows you of the Clear Girolami; and in one that I still haven't quite figured out, Orlando da Chiusi transmogrifies into Bordering from Sluices. (Making sense is optional.)

As a final example of personal names, I give you the redoubtable Farinata degli Uberti, Ghibelline leader and victor at the Battle of Montaperti. "Farinata" is itself a nickname; his birth name was Manente. A.T. managed to turn that into Permanent Uberti, an ironic name which could describe his family's state of exile from Florence once the Guelf party gained ascendancy. In Dante's dramatic account of his meeting with Farinata (A.T. calls him Flour) in Hell, Dante taunts him that while Dante's own ancestors had returned (twice) from exile, the Uberti "had not learned that art." 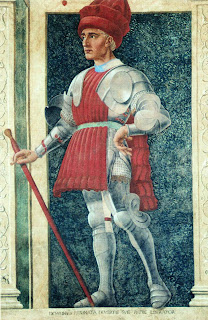 Nouns other than proper nouns can also become quite improper in the clutches of A.T. Thus, Florence's powerful Guilds somehow become the Limbs; the Commune itself becomes the Common One; the Grandi, or magnates (the wealthy and the nobility who controlled the government) becomes the Large Ones; and the popolo minuto, or the general populace, becomes The Tiny People. With a cavalier disregard for parts of speech, and retaining in Italian that which it cannot render in English, a phrase meaning "the crime of murder" becomes "one malificio of dead women."

Finally, there is an Italian word which meant something very different in the 13th century than it does today (it may have a different origin; the accents fall in different places, but A.T. doesn't know the difference). What once meant a council (or possibly a single advisor) now refers to a woman providing childcare, and that is why we can learn, thanks to A.T., that the warrior bishop of Arezzo, in the hours before the bloody battle of Campaldino, sought the advice of his nanny.

Next time, whole paragraphs of this stuff. See you then.

Images in this post: Corso Donati and Giano della Bella are from an illustrated copy of Villani's Nuova Cronica, Chigi codex, Vatican Library. Photo of the Cerchi stemma by Sailko, licensed under Creative Commons Attribution-Share Alike 3.0 Unported. Beatrice by Marie Spartali Still, 1895, and Farinata by Andrea del Castagno, both public domain by reason of expired copyright. Sign at top and bike (seen from window of the Casa di Dante museum) photographed by Tim Heath.
Posted by Tinney Heath at 7:47 AM

And of course, given that my mind is slightly more modern-times oriented, when I saw Run Donates to You, I thought: "Oooh, an ancestor for Rev. Run of Run-DMC."